The Man Who Came Back. Not a very inspiring title perhaps, but this is another little gem from Terence Feely, who also wrote the brilliant ‘Timelash’. In some respects TMWCB is ‘Kill Straker!’ but with a touch of romance, a goodly helping of stunning special effects and some phenomenal scenes set in space.

The story starts with Craig Collins, ably played by Derren Nesbitt, who is in a romantic relationship with Moonbase Commander Col Virginia Lake and currently travelling back to Earth in a single-person spaceship. He reports a fire in his cabin and Straker, who is in the HQ Control room, takes over communications. 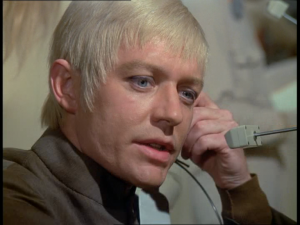 Not an enquiry from the SHADO Commander, but a desperate plea for information from one friend to another. This is a side to Ed Straker we have not seen for quite some time. And then, just as Collins is trying to save himself, there is a UFO sighting and Straker has to walk away and deal with the intruder while Collins battles on alone.

‘Question of Priorities’ anyone?

In previous episodes SID was little more than a voice from space, giving co-ordinates to Interceptors, but in TMWCB it comes under attack and we are treated to some fabulous shots of the station damaged and spinning out of control, while that wonderfully English voice intones dramatically –

(Mel Oxley, the voice of SID, was at the time of filming a BBC TV voice only announcer and his accent was the typical ‘Standard English’ required by announcers at the time.) 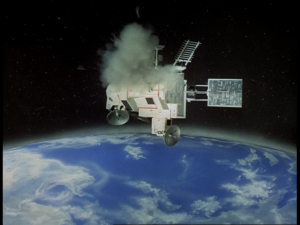 The episode continues after the first ‘advert break’. Viewers learn that several weeks have passed since Craig Collins was declared dead after his failure to re-enter Earth orbit. The calendar on Straker’s desk reveals the date to be 9th July (filming on TMWCB commenced on Friday 3rd July 1970).

Straker reveals a rare moment of outward emotion in this scene, telling his temporary secretary ‘Miss Holland’ (played by Lois Maxwell, of Miss Moneypenny fame): “Craig Collins was one of my closest friends. We were astronauts together.”

(And for anyone wishing to read a detailed, canon-based and logical biography of Straker, there is a well-researched one here)

Straker is clearly upset by the Colonel’s death, but SHADO must go on, and it is then that we see Craig Collins, bearded and scruffy, but alive somewhere in a jungle, having somehow survived the past eight weeks.

Once rescued, Craig returns to SHADO HQ where he meets up with Straker and Colonel John Grey. Collins deftly avoids the questions on how he survived and returns to Moonbase, where he sees Col Lake and Paul Foster sitting together and clearly in a relationship. It’s an awkward moment, made even more unpleasant when Collins kisses Lake, and what should have been a tender moment turns into an aggressive sexual assault. Col Lake forces him away and turns from him in revulsion and horror. It’s a profoundly ‘adult’ moment in the episode and a forewarning of what is to come. 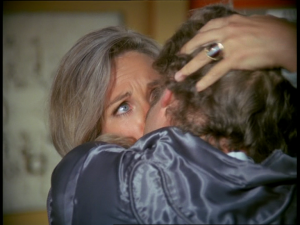 The long-standing animosity between Collins and his counterpart John Grey is brought to the fore over a game of chess, but Straker assures Grey that all the doctors have passed Collins as fit. The superbly directed scene in the studio grounds where Sir Edmund appears to be utterly terrified on meeting Collins, re-affirms Grey’s concern as to the other colonel’s mental condition.

On their return to Moonbase, Collins – now revealed to be under alien influence – sabotages the air supply to Grey’s sleeping quarters but fails to kill him. Viewers are treated to some excellent acting as Grey struggles desperately to escape from his room and finally manages to open the door. 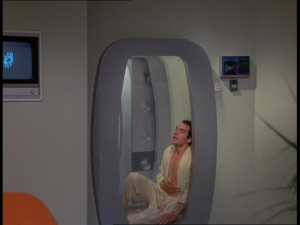 But, nothing can be proved and Grey is left with his own suspicions, even when Collins then instigates an accident that puts Paul Foster out of action thus leaving Ed Straker the only man available for the mission to repair SID.

Vladek Sheybal, as the enigmatic Doctor Jackson, does his usual trick of stealing the scene when he shows Grey the results of an unofficial test on Collins, which seems to indicate that Collins’ brain is being controlled by the aliens, and Grey sets off to confront Collins at his home.

The ensuing fight ends with Grey unconscious while Collins goes to SHADO HQ to confront Jackson – leaving the viewer to wonder what happens to the good doctor! 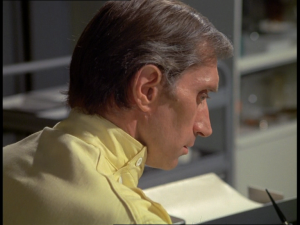 The ‘SID 2’ lift-off and Mission control scenes are lifted from Doppelganger and the attention to detail is outstanding, as are the scenes between Straker and Collins in the space capsule. There is a real undercurrent of tension in the story at this point: Straker seems aware something is wrong but has to trust in Collins, Grey is in hospital and desperately trying to contact SHADO HQ and it is only in the nick of time that Foster manages to warn the Commander of Collins’s treachery.

The ensuing fight scene, in zero gravity and against the backdrop of space must rate as one of the best space scenes in the series and it is only when Straker pulls out the air connection from his friend’s spacesuit, that Collins is defeated and floats away, dead-eyed and silent, leaving Straker alone in space and left to repair SID by himself. 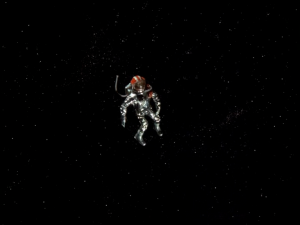 A thoroughly bleak ending, unlike the more upbeat camaraderie witnessed in the last scene of Kill Straker!  UFO was at its best when it eschewed the ‘HEA’ endings beloved by other programmes of the era. This was one of the darkest episodes with its themes of sexual assault and violence, and the final scene reinforces the loneliness of the men and women who have chosen to devote their lives to fighting the alien menace. 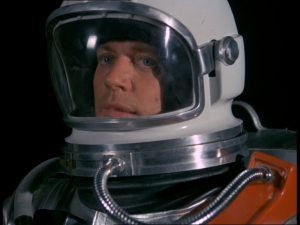