Aquaboi gives us his rather unique ‘take’ on the pilot episode: Identified 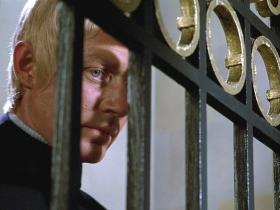 Glowing ufo-worked.
Splattering hot  babes with machine guns-worked.
Alien in trees shooting-worked.
Hot chick lamely trying to crawl up tree and screaming – didn’t work [ would have rather seen her grabbed and taken or splattered as she tried in vain to crawl up a tree.]

UFO /Rolls Royce chase – all of it worked.
Henderson being tossed over the side and exploding – worked.
Ms Ealand a definite worked.
Alec, seems silly and ridiculous, but I suppose that was meant to be light hearted. I would add some black or gold to his olive suit.

Straker’s office – worked. Better touches in the late series.
Nice way of setting up the characters, and the entire SHADO operation’s intensity.
Super sonic landing, a little ‘Thunderbirdy’, but it’s very nicely done. Worked.
Transition to Moonbase – didn’t work. Could be smoother.
I like the gals being in charge of moon base, for whatever reasons that could have been given…ability to concentrate or operate better in low g, – worked.

Straker chewing out com officer- nice exposition. I think that this scene works, although a lot of people have commented that it was too hard.
Straker’s intensity here is so personal, it seems that his family or a member of his family had a loved one abducted.

SST scene – all of this works, Alec seems too boyish in this, but maybe that was very popular. I would slow it down a little and make it more intense rather than comical.
SID inside looks like Hal in 2001 A Space Odyssey.

I don’t think that any of this is too slow, it is very dramatic for the SST, Moonbase, Skydiver and the UFO to all collide in adventure. I think the basic criticisms are because we are used to a faster pace thanks to this episode, later in the series.

An explanation of the UFO having to slow down to enter atmosphere might have been slipped in this scene. Skydiver scene works great.
The march music instead would have made this scene more intense.
So cool, spinning down with red smoke!
All this works great!

Premixing bar, great! Again nice expositions with Straker and Alec. Great alien scene with the doctors. Why is Alec taking a contrary position on the alien with Straker? I say that part didn’t work, they could have added a few more words to validate Alec’s position.

Nice full scale moonscape map on the briefing room.
Again nice expositions of why the aliens are coming to Earth, a little stingy on the ‘where from’ side Human like aliens with transplants here. – all worked.

Very satisfying as far as making a viewer feel weird and scared.