Keith Ford looked around the refectory with a frown; the busiest time of the day and no tables free. He didn’t like sitting with the medical staff who had a tendency to talk shop while they were eating. There was one table where he might sit; a table for four yet with only one place occupied . It would do. At least he would not have to listen to another discussion about methods of analysing time of death in aliens. He had not eaten liver and onions since then. He approached the table, tray in hand.

Straker looked up. ‘Sure. Have a seat.’ He waved his knife at the chair opposite and continued cutting up his steak. He usually ate alone here, which was the way he liked it. Nevertheless – he gave a quick glance around the room – it was busy right now and Ford was unlikely to disturb him. He carried on eating, ignoring the other man and reading the file he had brought with him just for this purpose. If he was busy, then he was generally left alone at meal times. He noticed that Ford had chosen the lasagne and tiramisu for dessert. He hadn’t expected Ford to choose that option. Tiramisu was a little too rich for him, especially mid-day, and anyway his favourite was on the menu today. He was going to treat himself to dessert for once. The chef had promised to send it over in a while; warm apple pie with cream. A new chef as well, the usual one on annual leave for a fortnight. It was always a problem, ensuring that new staff were vetted at the highest level, even for a non-operational position such as this one, but the references had come back clean.

Steak finished, he pushed his plate to one side and carried on reading the report, Nothing vital but it needed his approval. Foster’s idea of re-arranging the Skydiver patrol zones had real merit, but it would be more expensive and Straker could already hear Henderson’s sigh of exasperation at the increasing financial cost. He started to make a note in the margin, cursing as his pen ran dry.

‘Thanks.’ Straker carried on writing for a few minutes, until the waiter arrived, deftly removing both his plate and Ford’s. Another plate put in front of him, the fragrance of apples and cloves and cream making his mouth water. Handing the biro back without a word, he closed the folder, slid it aside and concentrated on eating. Across the table, Ford was silent as well, trying not to clatter his spoon against the glass as he busied himself scooping up his dessert and all the time wondering if, after all, he should have sat with the medical team.

There was a kumquat on the edge of Straker’s plate, a somewhat unusual embellishment for apple pie, he thought, but he finished the last crumb of shortcrust pastry and picked up the fruit, rolling it between his fingers for a moment, softening the pulp inside and letting the peel release its aromatic oils before he ate it. He suspected the slight metallic aftertaste to the fruit was due to the lingering sweetness of the pie but he rolled up his napkin and pushed his chair back, ready to leave as Ford scraped the thick remnants of richness from the rim of the bowl, licked the spoon like a child. He put it down on the plate, sighing with satisfaction and then blushing as he noticed Straker’s amused grin.

‘My favourite. Hasn’t been on the menu for a while.’

‘You should ask the chef to do it more often then.’ Straker noticed the time and grimaced. ‘I’d better get back. I’ve been long enough and Foster’s waiting. You have… another ten minutes? No need to rush, Lieutenant.’

He walked off, weaving a path between the busy tables, stopping once or twice to speak to an individual before making his way out.

Ford watched him go, glancing at his watch to see if there was time for another helping of dessert. There was a fountain pen on the table. Damn. He picked it up and hurried out after the other man. ‘Commander?’

Straker paused, turned around and reached out for the pen with a sigh. ‘Thanks Keith. I must be getting old.’ He set off again and the Lieutenant gave up thoughts of more dessert and followed him along the back corridor to the Control room. He would make do with coffee instead. 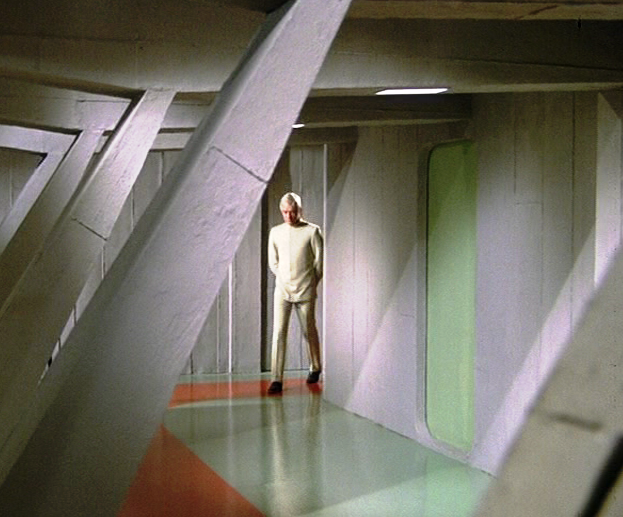 Paul Foster looked at his watch. Straker had been gone thirty minutes now, and Ford nearly as long. It wasn’t like Ed to dally over lunch. He was always back in plenty of time. It was a good job the control room was noisy, otherwise the insistent rumblings of his stomach would have attracted unwelcome attention. He took another mouthful of hot coffee, extra sugar, anything to ease the hunger pangs, even as he wondered which was worse: the griping pains of unassuaged hunger, or the full bladder he would no doubt experience after so much coffee. At least a quick trip to the nearest head was not a problem, unless there was an emergency. But where the hell was Straker? He tapped his watch with a finger, more concerned than angry. It was not like the boss to be late.

He was just going to have Straker paged, when he heard muffled shouts outside in the corridor followed a few seconds later by a thud and the sound of someone calling for help. Hunger forgotten now, he hurried through the doorway heading for the distant noise at the far end out of sight. He turned the corner and stopped.

Ford was hunched over close by one of the buttresses, hands on knees, his dishevelled hair and clothes covered with sparkling white dust, and as he twisted round to face the colonel, Foster could see the same substance encrusting eyebrows and lips. Wintry air filled the corridor, wrapping Foster in a blanket of cold as if the temperature controls had failed. No. It was not the heating at fault; Keith was at the centre of the cold now pervading the corridor. Ice cold in fact, as if Keith had been surrounded by sub-zero temperatures and the cold air was spreading outwards. Ford gave him one relieved glance from eyes that were bloodshot and half-closed before slumping down to the floor.

Paul’s mind half-registered that Ford was wearing white socks, slightly grubby around the heel, and he realised that, somehow, the communications officer had lost his left shoe. There was no sign of it in nearby. He stared, blankly, at the sock-clad foot for a moment, before he saw Straker, crumpled against the wall behind the buttress, and gasping for breath as if starved of air.

Straker lifted a hand to his own face, rubbing his cheeks as if unable to speak until he had regained some warmth to the frozen flesh. ‘Doorway…’ He forced the word out. ‘Keith. Pulled me back.‘ He closed his eyes for a moment. ‘Is he okay?’

Foster twisted round to look at Keith Ford as the medical team approached. The Communications chief was curled up in a ball now and shivering, a good sign really, but his eyes were tight shut and the temperature in the corridor was still bitter. There was a loud thrumming and the rattle of vents as the air blowers kicked into action and a draft of welcome hot air blew down the corridor. Jackson pushed him out of the way and proceeded to examine Ford, and, ignoring his growling stomach, Paul returned to Straker who was now standing, rubbing his arms and ashen with cold as he moved closer to the air vent and lifted his face to the hot air, steam rising like a cloud from his hair as ice particles evaporated.

The team hurried Ford away to the medical unit, Straker and Foster following at a slower pace as the crowd of onlookers who had gathered in the corridor dissipated as quickly as the icy air. Straker had regained some of his usual colour when they reached Jackson’s rooms, but he accepted the offer of a hot drink with alacrity and held the mug tight in fingers that were still numb.

He looked over at Foster. ‘I don’t really know how it happened. The scientists might be able to work it out. All I know is that I was walking along the corridor. Ford behind me. There was a …’ he paused, frowning. ‘,,, a doorway. That’s the only way to describe it. Just appeared. Right in front of me.’

‘Doorway. In the corridor.’ Paul sounded sceptical, as well he might, Straker thought to himself.

‘Not a door. A portal? Wormhole? Whatever, it was cold, dark and it pulled me through. Nothing to stop me. Nothing to hold onto. Then Keith grabbed my arm.’ Straker massaged his wrist, wincing as torn tendons protested. ‘A passageway on the other side. Cold as space. And dark. There was something on the other side. At least I thought there was. Not here though. Dim lights and heat and …things.. ‘ He shuddered. ‘If Keith hadn’t held me, if he hadn’t clung on, even though he was inside the doorway as well, and freezing to death, I’d’ve been dragged through to whatever was there. Waiting.‘ He held out the mug for a refill.

‘Aliens? They’ve never tried that before. And how did they know you’d be there at that precise moment? In that corridor? ’

‘Not sure yet. I have my suspicions but I’ll need Jackson to check it out for me once he’s finished with Keith. All I remember is thinking that this was it, and then Keith grabbing me and pulling me back. Don’t know how he managed it. He was half-way through the doorway himself. Clinging onto the buttress somehow.’ He drained his mug in one long drink and put it down. ‘Go and get your lunch, and ..’ he tilted an eyebrow. ‘Don’t eat the apple pie. On second thoughts…’ He reached for the intercom. ‘Security? Straker here. Close the refectory and take the chef into custody. I want all foodstuffs checked for alien contamination. You can start with the kumquats.’ He looked up, shrugging at Foster’s expression. ‘Sorry Paul. You’ll have to make do with sandwiches.’

The captive was not what they expected. It lay on the floor, motionless. Not breathing or making a sound. Smaller as well. Much smaller. They had prepared a large cage for it. Even a force field to stop it from attacking them. It had killed enough of their allies after all. Or perhaps the information from their so-called allies was incorrect? Perhaps they had been fools to trust them. Was this in fact a trick?

Eventually one of them dared to approach it, despite warnings that this one was considered to be the most dangerous, and hated, of the species. It touched the prisoner with the tip of one tentacle before swiftly retreating, spitting and retching to clear the vileness from its mouth parts. There was an obnoxious smell. A disgusting smell, spreading across the room like a fog. They could see it. Dark and thick.

Revulsion and fear combined now. Was it a trap? A means to poison them? There was only one thing to do.

They opened the wormhole and sent the enemy it back to where it belonged.

Outside SHADO control room, there was a thump as Keith Ford’s size ten, light tan, leather shoe bounced off the wall and came to rest. 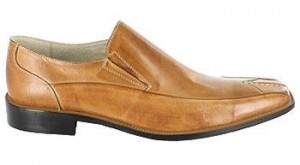