(Time: Screen Action at start of the commentary by Gerry Anderson) 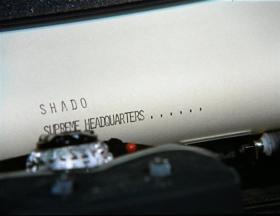 UFO was made in 1970. That’s thirty years ago. I had made some nine television series for Lew Grade all featuring puppets and we were beginning to drown in our own product and Lew one day said to me ‘Gerry, I think the time has come for you to turn to live action’  And so I did and UFO was the very first series that we made in live action. I have to confess that I directed the first episode, And I say confess because when I reviewed it I realised just how slow the pace was and I sat there thinking ‘I wish I could do it all over again’. But I suppose for many people who remember the series it will bring back, hopefully pleasant memories, and I’d like to talk about some of the things that happened before and during the production. 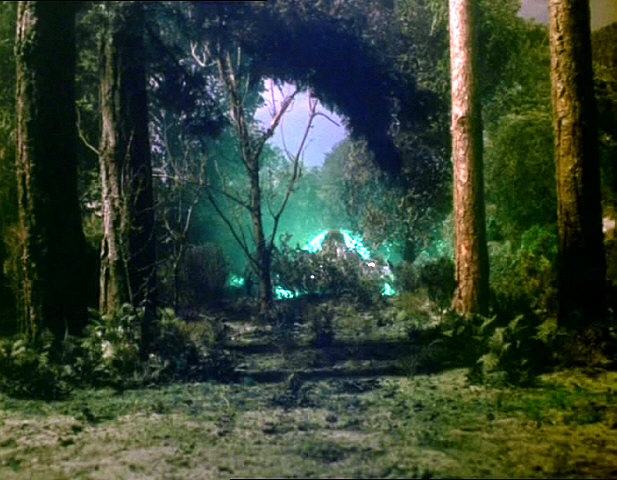 First of all, the special effects in the series were made by Derek Meddings, and of course today we have all sorts of wonderful aids like computer generated images, but when I looked at the show the one thing that did stand up was the special effects. This particular sequence was shot in Black Park just behind Pinewood Studios .

One of the things that I do remember is that dear old Barry Gray who wrote wonderful music for all of my series, on this particular occasion wrote a piece that I felt wasn’t exciting enough. And at the music session I asked one of the percussionists if he would cover the sequence with percussion, and he said he would, and I said ‘Okay well we’ll do a rehearsal’ and he said ‘No no, I’ll do it straight off’. And as you can hear he made a terrific job of it. This little girl (Anderson is referring to the actress who played ‘Jean’) did very well but unfortunately for her she didn’t last very long. 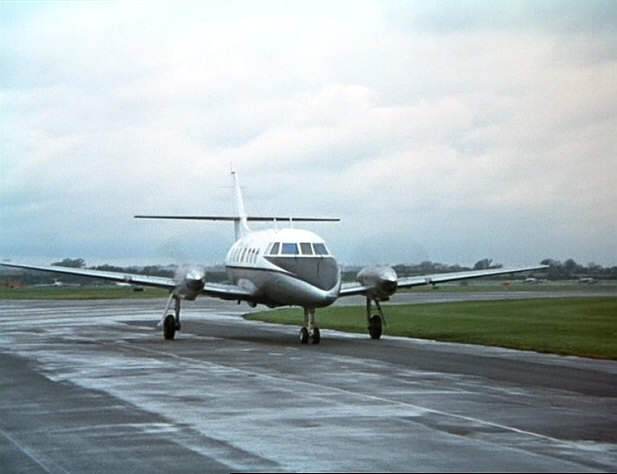 I remember filming this aircraft landing and we were given the use of the aircraft and because I was trying to do a really good job I asked the pilot to land right by the camera and he made no less than ten attempts until finally I accepted what we had. I mean looking back it was entirely unimportant that he should have landed close to the camera, but there you are, I was trying my best. I believe this aircraft is still in service.

03:35 (Straker appears in the doorway of the aircraft) 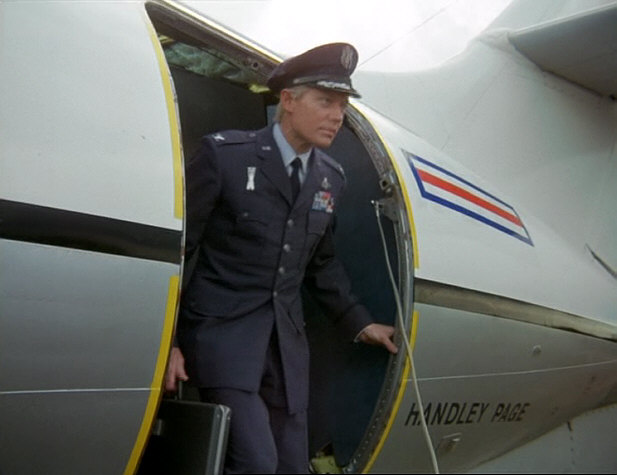 This of course is Ed Bishop, who became my favourite actor. He was a man who always turned up on time, always knew his lines, always very, very co-operative and really just a very, very good actor. I thought Ed would become an international star And I think it’s very sad that he didn’t, but that was nothing to do with his ability. 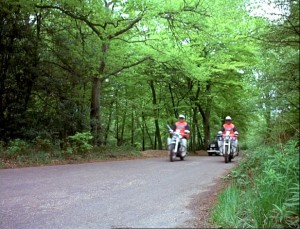 On this particular sequence it featured a UFO attack and Derek Meddings had laid charges all the way along the road and because it was a television series it was not the sort of thing we could afford to do twice. And so there was a lot of preparation and when we finally took the shot and the UFO attacked, (any minute now) all these charges were let off and of course we had a number of cameras covering the scene and I remember when it was all over I called out to the various cameras how was it and I got reports; you know.. ..number one camera okay, number two okay, number three okay. And Number four – the operator was a guy by the name of Alan Perry, and he appeared; he actually stood up out of the bushes, and I remember seeing a jet black face with two eyes peering out,. I mean he’d caught the blast, he wasn’t hurt but he looked quite ridiculous. 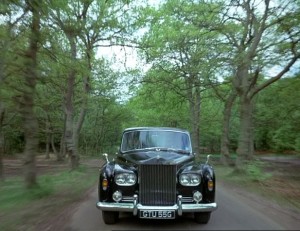 This Rolls Royce was quite expensive to hire and, for those of you contemplating buying a Rolls, what you are about to see is not the way to drive one.

05.57 (Straker locks the file away in his case and slides the ‘destruct negative’ across.) 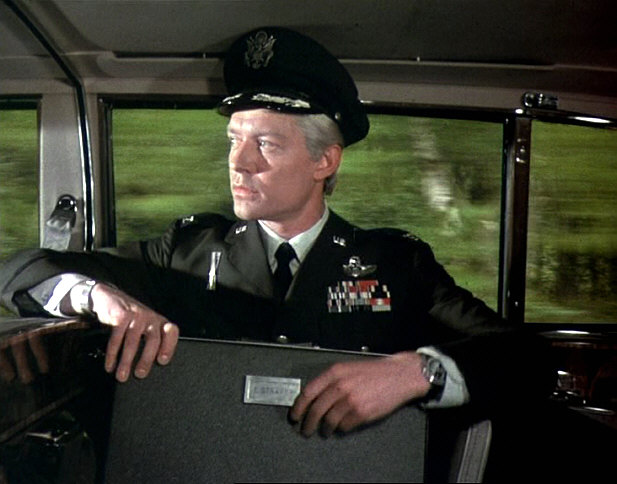 I think Ed looks the part here doesn’t he? Wonderful. 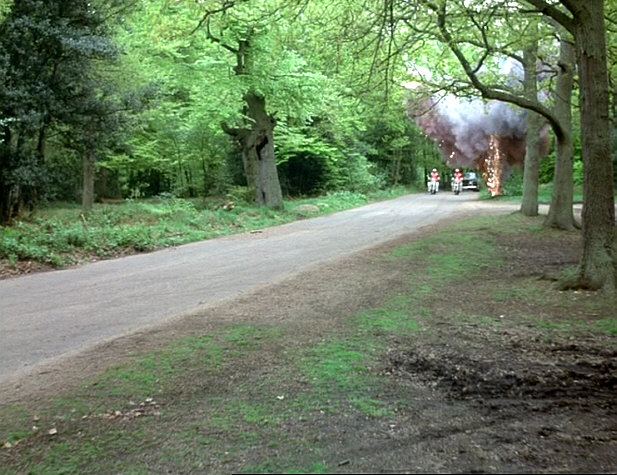 Here come the charges, and this is not the way to drive a Rolls

06.34 (Rolls trying to evade the explosions) 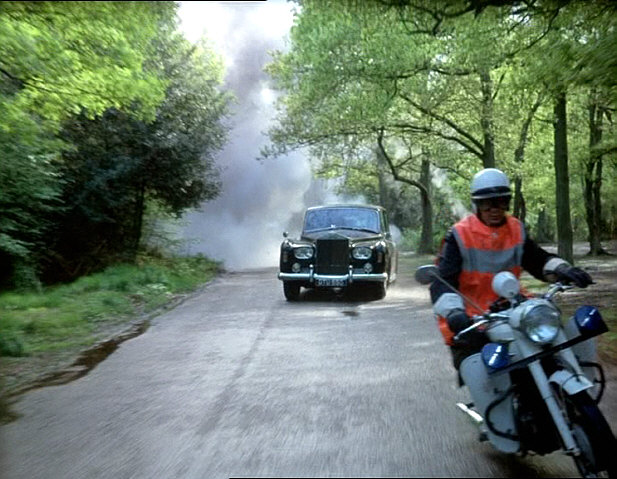 The UFO, which you’ll see in a moment was really quite difficult to fly because it was actually dangling on a piece of wire and of course it had to fly so that ii didn’t do anything other than fly smooth and straight.

07.07 (Straker on the ground as the Rolls bursts into flames) 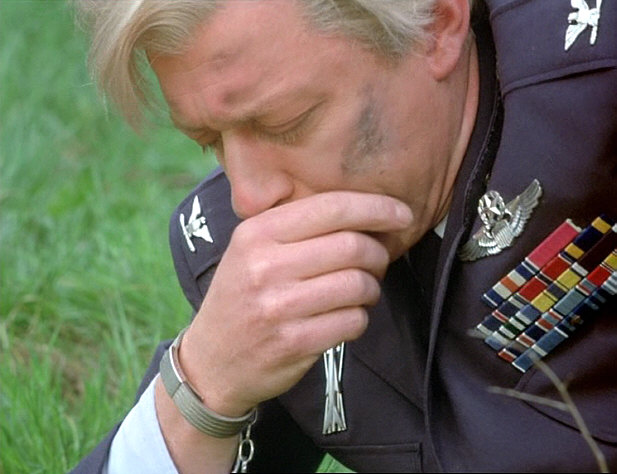 I’d love to tell you that we actually wrecked a real Rolls Royce, you know, no expense spared, but of course that was a model shot. 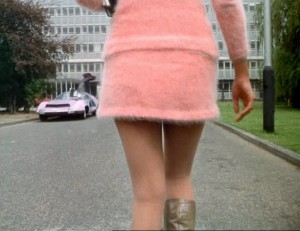 Now Harlington-Straker Studio was in fact a studio in Elstree. It began its life as British National; it was then taken over by ATV, the company I worked for, and so of course it was relatively easy for us to go in there and film the main titles. The Model T Ford you see came from one of my puppet shows called The Secret Service and the car in the foreground was specially made for the series. The body was made of beaten aluminium, here it is again, it had gullwing doors. Seemingly they operated automatically but in fact always what happened was the prop man would d run in out of picture and raise the door. But it all looked pretty realistic. 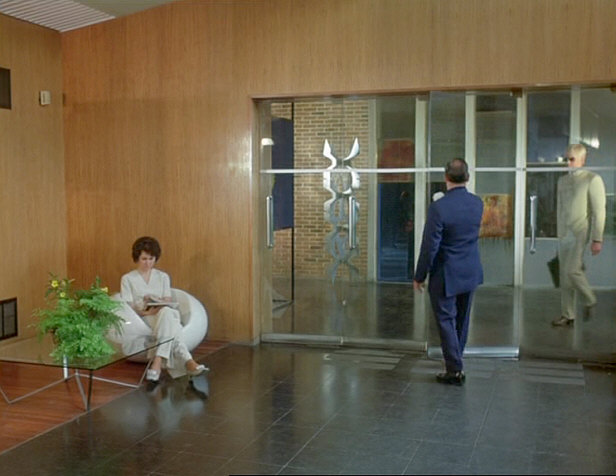 The show was produced by Reg Hill, one of my business partners. Lovely man who sadly died recently. This is the interior of the ATV studios which we also used. 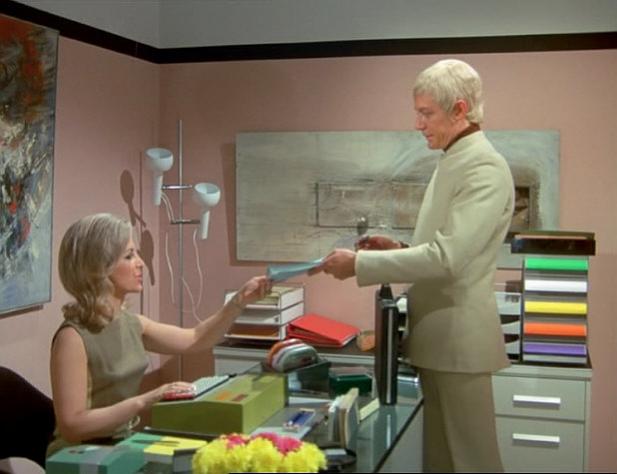 Ed with his faithful secretary Miss Ealand, and when I say faithful I’m not sure that’s what I really meant. I’m sure she was faithful but I wouldn’t know. I had the problem that we were making a sort of a futuristic programme and the cost to building futuristic sets was phenomenally high and we couldn’t afford to do it, and I really didn’t want to compromise so I came up with the idea of making SHADO headquarters under a film studio and in this way we were able to build the main set and do a really good job of it. Why a film studio? Well we put the control room underground and in that way nobody knew that the headquarters existed there. 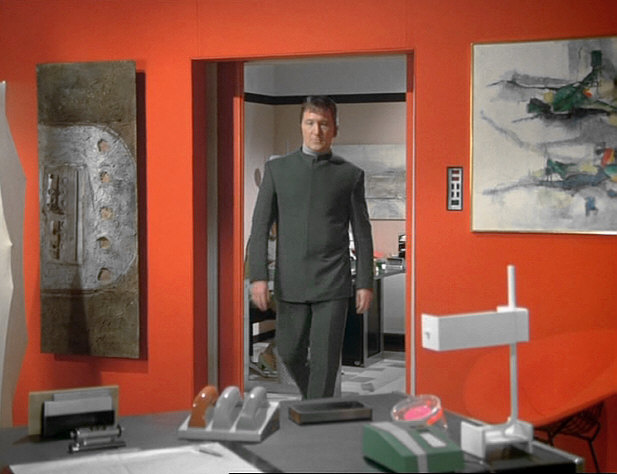 One of the things that has always amazed me, and that is that Ed Straker and visitors would go in to the office and the whole office would go down rather like a lift in to the underground headquarters . And that was fine, but here we see George Sewell by the window and down he goes. But why was it that nobody in the studio ever saw it go down? I didn’t think of that at the time but on reviewing the picture, ready for this commentary I thought you know, I’m surprised that somebody in the Studio didn’t say ‘Why is that office going into the ground?’ There we are: nobody seemed to notice. 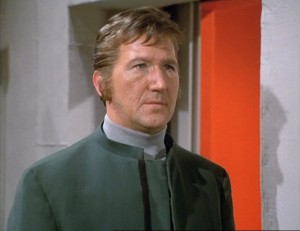 George Sewell seemed to have a fascination for women’s bottoms which I suppose is fair enough. But again on looking at the film I was quite amazed at the number of times he took an interest in this particular subject. You see, what I mean you know, here’s a set that is all shuttered concrete, filled with all kinds of computers and what was then futuristic equipment . What we did was we had our own company which used to build all this gear. The managing director was a man by the name of Don Fagan … 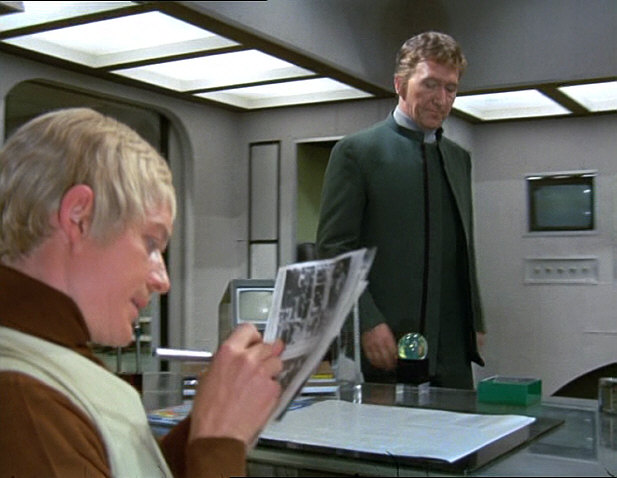 …and the wonderful thing was that whatever props he made were all electrically operated and they always worked perfectly which was marvellous. George Sewell, I’m not just saying this, I mean everybody praises their artists because they feel they have to, I’m being quite genuine when I say that Ed and George were great great guys in every way. Good artists, co-operative, and really really helpful. 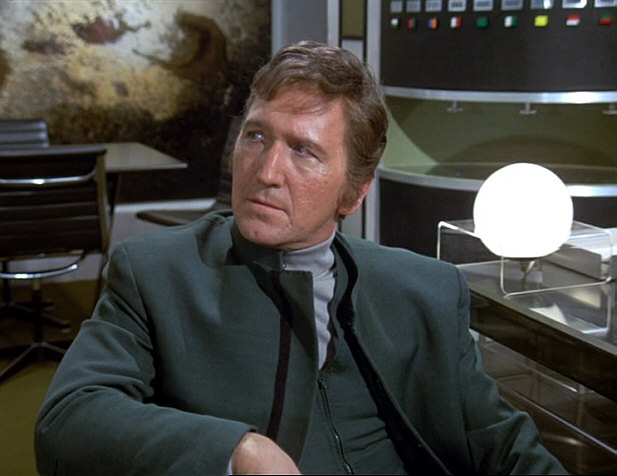 In the background here you can see part of a big mural which was painted by our assistant art director Keith Wilson. One of these chaps who could sot of throw paint on a canvas and then ride over it with a bicycle and that sort of thing and he would have a wonderful effect. I remember I started a little company with him. He was going to all himself Paris. The company was called Paris Designs and we were going to sell these all over the world, and at the end of two years we hadn’t sold one. And that was the end of that idea. 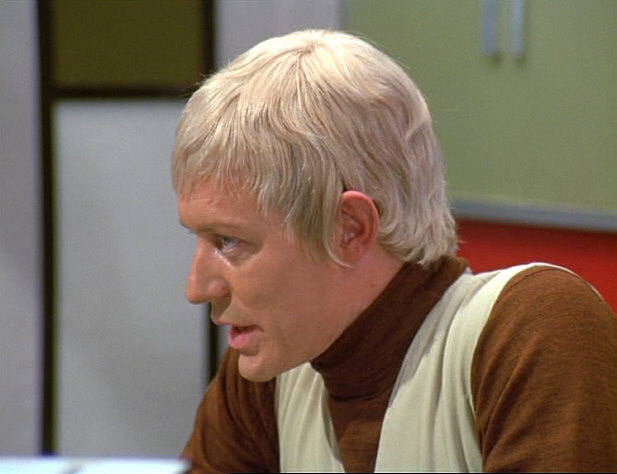 Ed was given a wig, which I think helped to make him really interesting and looking right for this particular show. 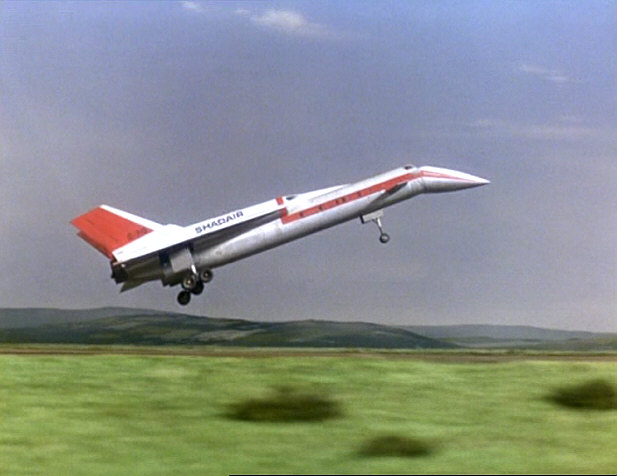 Here you see one of our model shots of Concorde type landing with nose at some 17 degrees up and the snoop down. The flight deck is rather bigger than Concorde but that because we were looking to the future. 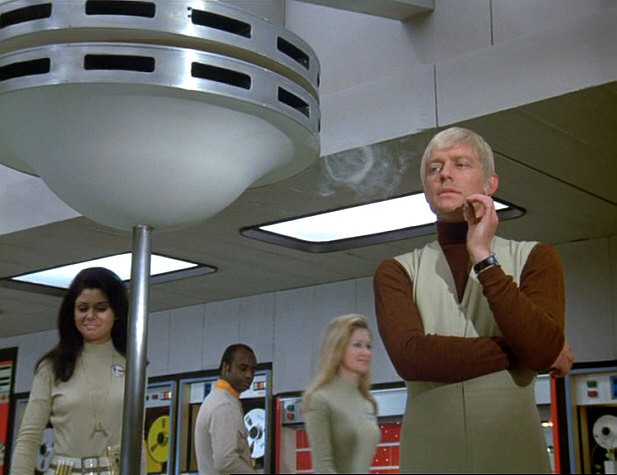 Smoking of course was allowed on screen in those days, so we weren’t quite as sure as we are today that it caused lung cancer and all sots of other diseases. But I remember I asked Ed to blow a smoke ring and I thought to myself; ‘this shot is going to go on forever’. I imagined myself saying ‘take fifteen now’ you know, but he did it first time. Amazing guy.