dragon watches too much anime. UFO/D. Gray-man. Nothing mine except for the OCs. 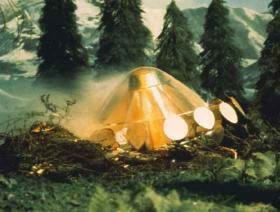 The crash site was remote, far back in the tree shrouded Appalachian Mountains. Straker surveyed the long tree top smashing route the spinner had taken to land in the clearing where it was nearly half buried in the black loam of the region. So far, there was no indication of survivors as they moved in to capture ship and crew. It was sheer luck Straker was on the ground in the US when it happened. Or perhaps it was planning: the aliens could have known where he was. They did not succeed in finding him if that was their plan.

Two operatives stood watch by the mobile all terrain unit blocking the dirt track that led to the clearing. Kurt Evans blinked and lifted his rifle as three black clad figures stepped onto the track out of nothing. He barely had time to note the odd long coat over slim trousers and black shirt they wore as if a uniform before a gesture slammed him off his feet and into the side of the mobile unit. Consciousness fled. Bert Davis came around the front of the mobile at the noise. His collision with the nearest ancient tree trunk was equally effective in taking him out.

The leader of the trio gestured again, this time without such devastating consequences. The other two took up shaded positions, equally determined to keep people away from the crash site. The leader strode past the mobile and down the track until she located the spinner and the rest of Straker’s people.

“Are you telling me there’s no way to get this one open?” Straker demanded of his team leader.

Andrew Markus nodded. “Yes, sir. Nothing we’ve tried is working. The last three responded to sonic frequencies. The four before that were attuned to magnetic. We’ve cut them open with torches and metal slicers and lasers over the last decade. This one is repelling everything we’ve got on hand. Maybe they’re taking notes,” he ended dryly before his eyes widened and his mouth fell open as he stared at something behind his boss.

Straker turned, grabbing his Glock out of the holster under his left arm and nearly dropped his own jaw. Three feet away stood a woman the likes of which he’d never encountered outside of graphic novels and Japanese anime. Sun kissed hair flowed back from her face, across her shoulders and down her back. The skirt of her black coat swirled around her ankles, black boots buckled up the sides of her calves and ended at her knees where black pants were tucked neatly down into them as the black shirt was tucked into the waistband of the pants. Her hands were held loosely at her sides in spite of the whirl of energy he sensed held within. Wrap around sunglasses hid her eyes from view as his own sheltered Straker’s stark gaze.

Her tone was clipped but resonant; the question demanded an answer.

“Straker. Who are you?”
She surveyed the crash, ignoring him. “You have no jurisdiction here.”

He could feel her gaze on him. “I have jurisdiction over the crash site and the remains,” he returned crisply. He pulled out his identification to back up his words. She waved it away without looking.

Several more black clad figures stepped out of the shadows of the forest, inserting themselves between the SHADO personnel and whatever their leader sensed. Straker watched the woman turn away from him, take several running steps into the clearing and then literally launch herself into the air, rising swiftly to meet several strange rotund things rushing toward the clear. A gesture told his people to head for cover while he remained to watch the strange aerial battle above them.

A trio of her companions surround him, their silence eerie. With no evidence of weaponry, the woman flew around and through the things, kicking and slicing through them with her bare hands. Four of the six took damage easily enough and exploded, showering fragments onto the trees. The other two dodge and dove toward the spinner. At close range they looked like deranged clown toys with gun muzzles sticking out of them. They fired at the people on the ground. Two of the black clad guardians took hits, black stars marking their skin before they disintegrated.

She dove for the nearest one, catching it in the face with a shattering blow. It cracked in half before exploding while the other hovered over the spinner. It rotated so the mask face confronted the woman. It roared something in what sounded like Japanese, taunting the woman.

“Baka akuma,” she yelled back and slammed into it. “Stupid, idiot, dumbass akuma. Hasn’t the Earl learned anything?” she screamed as she pummeled it until the surface cracked, fell apart and exploded into black smoke, raining bits and pieces down on the spinner. She landed hard, going to one knee, a hand out to keep her from falling over.

“What is an akuma?” Straker asked of no one in particular. Given what he’d just seen, he didn’t really expect an answer.

“Demon warriors in a battle that started just after the Flood,” one of his guardians answered him. “A little over a hundred years ago, Walker the 14th backed the attacks off with the help of several other exorcists. Walker is getting old, now, even for a Noah.”

“Brak, you talk too much,” the woman told him as she stepped forward and laid a hand against the metal of the spinner.

The young man shrugged his shoulders. “Blame it on gramps,” he said. “Once a Bookman, always a Bookman,” he pointed out with an infectious grin. He kept Straker from moving forward by putting his arm out in front of the man. “Don’t. This really isn’t your issue at the moment.”

Knowing that what he had just seen was as alien as anything the spinner had thrown at them, Straker chose to obey the admonition, but still he watched as the woman … “Does she have a name?”

“Her? Sure. Cross. Jane Marion Cross. She’s the granddaughter of one of our greatest generals. That’s a really long story, too,” he ended regretfully. “Aw shit,” he added as he noted the tears dripping down Jane’s face.

Straker frowned. What about the craft was making her cry? He watched her place both hands against the hull of the ship, a pale lavender light seemed to gather about them. Slowly, she pulled back until only the tips of her fingers were touching it and a ball of the light was cupped in her palms. He strained to hear her words, for she was speaking softly.

“It’s all right, little sister. Come to me. It’s safe. I won’t let anyone harm you.”

The light grew brighter and larger until she stepped completely away and Straker could see the form of a young girl in what his mother would have called a summer frock standing there, holding Jane’s hands. She looked about eleven or twelve, her hair bobbed at about chin length, her eyes wide and dark fixed on Jane’s sunglasses.

Jane pushed the glasses up on her head, letting the girl look into slightly elongated gray eyes. “It’s all right,” she repeated, her voice husky with tears. “You’re free now.”

“No. Never alone. Look around you.”

The child turned her head from side to side, seeking who knew what. “There’s nothing. “ She looked at the ship. “They’re coming!” she shrieked suddenly and burrowed against the tall figure who now held her protectively.

She looked up into the gray eyes, still wet with sorrow. “No?”

“No. I won’t let them and really, the way you are now, they don’t know how to do anything to you.” Jane smiled down at the girl, a warm smile. “Look around again. What do you see?”

Straker looked and thought he could detect a bright patch under the nearest trees. He shook his head and rubbed his eyes. Was he seeing things? No, there was definitely a brightness in the shadows over there. The girl found it as well.

“Daddy?” she called hesitantly, peeping out from under Jane’s elbow and then moving toward the light. “Daddy! It’s me! I’m here!” she called as she ran to the luminescence, blended with it and was gone.

Jane met his eyes then, wiped her face and pulled the shades back into place before giving the spinner a startled look. “Oh … my. Do these things do this a lot?”

“Do what?” Straker asked, although he suspected he knew what was happening.

“Explode?” she asked as she dived toward him and her companions. She took Brak and Straker to the ground, shielding them from the swiftly flying shrapnel as the spinner showered them with bits and pieces.

“Frequently,” Straker answered her, his tone a little muffled by the cloth of her coat. Jane was generously endowed to go with her height. She blushed slightly as she rolled off of the two men. Brak gave her a rakish grin while Straker merely got to his feet and brushed dirt off his suit. “What was that?”

“A soul. The ship was … a cyborg. They had her as the brains of the computer system, I think,” she answered with a frown. “They lied to her about you and your people,” she added. “She didn’t belong in there.”

Jane pushed her glasses up to regard him curiously. “No.” She smiled then, brightening her entire face. “No, they don’t.” She searched his face for a moment and nodded. “Be careful.”

With that soft admonition, she turned and walked back into the forest followed by a handful of the others, Brak bringing up the rear. Markus joined Straker with a shake of his head. “What just happened?” he asked.

Straker gave a polite snort and gave his opinion that they had just witnessed another secret war, one he was glad they didn’t run into every day. “Gather what you can of the debris. We’re done here.”