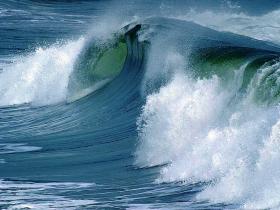 She started paddling for speed long before the peak was much more than a roller. She had to be travelling- laying on her board, faster than the wave in order to catch it.

Some surfers could drop in late, when the wave was already curling over, the bottom dropping out, and slide into the tube or shoot out way in front of the crushing lip of the tube. Then lean into a sharp turn and slash back onto the shoulder of the wave, doing cut-back turns.

The edge of the surfboard turned in such a short arc that it sprayed droplets of wet little stars, each one glittering like diamonds of sea water in curving jets.

Now she had to slow down and drop backwards by sliding in midway of the open mouth of the tube and regain the wave position of under the curl, the fastest part of the wave.

Too far back and you go under, too far forward and you lose speed and fall off.

Just as with jumping around on the moon, trying to gauge and fix exterior damages on a moon hopper or moon base shell. Balance was essential.

Balancing your life was essential too, like living in a boxed in hamster cage that linked little boxes with short little tubes on a mote of dust instead of the Earth, so exquisite, when absent from it.

Human beings need to be gravitated back to Earth normal or go space mad from brain chemicals that haven’t been pulled and pushed back and forth, and shot through veins at a certain rate, or imbalances causing mood swings, and usually violence will occur.

Vacation was the answer.

She could drop all the stuffy pretences of her British upbringing, moon base and S.H.A.D.O. ranking and everything else and just be a female with the ocean, such a coveted position by those who lived inland in cities and work bound, just to be free with the sea.

Natural, moon beams, fairy dust, incense and deserts and such, regain her youthful fantasy playful attitude she could never express at work, or even at home with her family. But here, she could go wild, and no one would know, not even the surfer that she wrote to in her youth as a school project, to exchange a daily routine with a foreigner and write an essay on it, no one would know that he had captured her in a dream of the beach and the thrill and madness of surfing.

One day she would go try it she promised him, and she did, and kept at it until she surfed at dream spots during wave seasons all over the world every year.

It was fun, a skill, and a science to her, like computing trajectories of comets or orbits of space debris or even the tense heart stopping course of a UFO approaching Earth to begin another travesty.

Inclining the plane in the vortex, a skill mastered only by experience and years of trying.

Compute; angles, speed, depth and mass moving, all of it sucking upwards and over the top and hurling out a huge green watery blanket over you, almost a foot thick with enough force to break a car windshield.

Calculate; the delicate balancing act of keeping the blade like board on the best part of the wave, keeping up with a moving conveyor belt of churning seawater, always having to think ahead and guess what the wave will do next, as it is a rolling tube of liquid, shaped by the sands on the bottom of the shoreline, all of this, for having fun.

Gay was paddling hard now, getting up to the speed of the rolling hill of blue green water that would pitch out at a certain spot on the sandbar that emulated reefs.

She looked down and could see the in the shallows, humps of sand on the bottom. She was excited and aroused prepared for action.

The rolling peak of the entire wave started curling over, speeding diagonally to the beach, and Gay paddled fast and hard to join into the peak of the wave. She raced to catch it as it would rise and pitch out-making a tube for yards to ride in all the way to the shore, where it would break on the wet sand, closing out completely into splashing foam where the land starts, and the ocean rollers finally end.

Her board was the colour of Salmon pink, spattered with rhinestone stars in reflective metallic paint, and clouds of dark midnight blue over a cratered gray brown desert scene on the bottom, with the coral colour clean on top.

Smeared clouds of white Zog’s sex wax rubbed on and combed there for non-slip traction.
Three fins, on the bottom at the tail, dug in on turns and kept her steady in the wave tunnels when needed.

Her dirk shaped wave rider was just a little longer than her by maybe fifteen inches with a fat round tail, which made slashing turning manoeuvres on small waves possible.

Her favourite spot, Face-grinders, (Legend states that it was created by magic and mind power and named by an avid surfer who lived behind the lagoon in front of it in his parent’s car port) kept a steady 7-9 feet face, trough to crest height, and would grind your face in the sand if you dared for a sand tube at the utmost end of the wave.

So the pink speckled wave-knife was the perfect board for what she wanted, the materials produced and finished by moon base technicians. Computerized specifications that Gay had worked out on coffee breaks before her vacation, exactly to her own tastes.

The very best of space age materials, woven carbon fibres and buoyant foam and epoxies for strength, durability and speed and lightness, all from the moon and space dusts and gasses collected and refined into building material, entirely just for the tunnels of the ocean.

It was the only dick she touched many male surfers joked to themselves as she ignored their whoops and hoots to her when she passed by, carrying her board under her arm.

Who could blame them? Her glamorous figure, the paint job of the moonscape on her surfboard, in her purple wetsuit, that showed it all, she looked sexy as a mermaid, a goddess, as if the purple skin had been poured over her and solidified.

S.H.A.D.O. scientists made it for her, soft and warm, with a solar filament heater run through the gel soft rubber suit to keep her warm in cold climates.
Sea angel,

They called these and many other nick names to her when she passed their little groups hanging out getting tans or smoking joints of winter pot.

She just walked by, but didn’t change the swing of her gait; after all, she is a woman and wasn’t going to give up anything to a bunch of boys gawking at a practised, cultured British woman. They would just have to suffer her loveliness and dream. Although it was tempting to play with their minds and tease them, a beach game that people play. Because of her beauty and dignity, they allowed her to surf on their territory, without them shooting their boards at her on the waves, or slashing tires and breaking windshields on the land.

The wave was moving under her now, picking up speed and height, and she was sliding along from her paddling so fast that she dropped down about half way on the hill like watery peak, these were lefts and travelled north, facing the beach from the wave, her left hand would be foreword to the nose, and her behind to the wave face.

She grabbed the sides and pushed down on the perfectly sculpted edge of the board for hydroplaning, called chime in slang, carved for speed and manoeuvrability nose to tail, smooth and rounded on the nose, for looseness, hard and edgy on the tail, to dig in and push against in the fast moving oceanic wave, all for turns and straight fast runs.

She was up, hopping into a cat stance, and leaning forward so she didn’t slip out and fall backwards on her behind and shoot her board up in the air: even with a leash, it was still dangerous. Besides, who wants to fall and miss a wave?!

Digging in she turned hard into the wave backside and leaned head up into the roof of the wave that was peeling over her.

The offshore wind was blowing onto her face with a little salty sparkling spray from the lip splashing down over her and in front.

Part of the natural beauty of the wave is the way the sun lights up the spray and a prism in each little drop and the translucence of the entire tube, roof to bottom, all rolling and turning like a giant kaleidoscope.

She was in the tube and now sliding nose angled down in the green sea-bright lit room of the tube. Then, it backed off, a valley on the bottom of the sea, where the lip had pounded the sand away, so she crouched again in a cat stance and pressed her front foot up, she shot up and carved like a race car along the top of the wedge, and then down the face, a graceful fast turn, that filled her with glee and a joy and power that only free-riders know of.

She smiled, glowing in freedom and nature, speed and power and the graceful mastery of a part of the ocean only a few dare to romance.

Boards break here, faces smashed and grinding on the sand. Your own surfboard can become an angry betrayer and shoot back at you, sharp fins first, at your face or neck, here at the final border.

The wave lined up like a wall, jacked up to around seven feet tall and then was a straight shot that would bullet her through frothy, sand mixed railroading curls that would end in a long tube and then the beach and a wash back of the bubbling shoreline and sea.

She reached nirvana as the tunnel swirled around her, and crouched deep as the tube got smaller and sandier, and finally popped her out, on the shore break sand.

She ran off her board expertly so her fins wouldn’t break on the sand and the hoots and hollering of the boys made her giggle.

She bent over and turned to give them a full view as she picked up her board in victory and ran out into the whitewash throwing her board like a spear into the rushing in water and then sliding onto it and paddling out, a few duck dives, grabbing her rails and pushing against the lower part of her board with her knee got her out past the sloppy breakers and she was in the channel and heading back to the peak.

Everything was perfect in paradise this day,

And you can’t get good waves on the moon, she laughed at the moon base crew as she departed to the shuttle. Although she did do a little moon dust boarding, gliding down the powdery inside slope of a crater once, on a prototype board. The gravity was just right for it, yet, she needed a moon dome and free air to make it fun.

But for a while, she could be a mermaid and ride the waves, without the burden of UFOs or Commanders or moon problems or anything else.

There was only the sun, the offshore wind, the sea and the waves for her to ride. 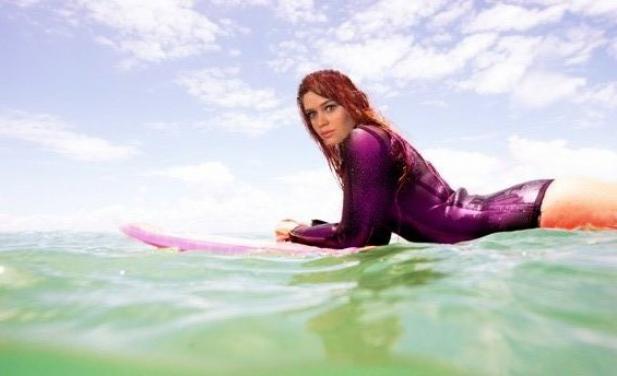