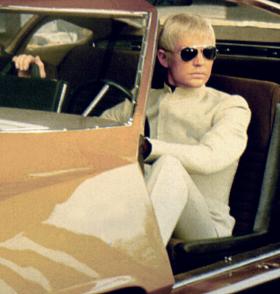 Ed Straker is so often depicted by fans and in fanfic as a ‘superstudly’ and heroic man of action. Hard–ass and unfriendly, calculating and cold, sexy and virile, wealthy and calculating, as well as being a loving and devoted husband and father. A whole raft of different Strakers.

But.. what is the truth?

Is Ed Straker really like that? Bedding every woman he meets who takes his fancy? Rude and arrogant to actresses, a super hero who saves the day and the world? A man, who in any other fandom would be ridiculed as a stereotypical Marty Stu?

I started to watch Identified to see exactly how he was portrayed by Bishop, who did a pretty good job of showing us who Ed Straker really was. In fact if Bishop hadn’t been such a great actor, who managed to portray Straker as such a complex and tormented character, then UFO fandom and fanfic would, no doubt, have died long time ago.

It was Bishop who gave us an Ed Straker filled with self-doubt and angst. A man who was not the confident, charismatic superman who  appears in so many stories. From the first moment we see Straker on that plane heading for London, to the last anguished glimpse in Long Sleep where he walks away, alone, we have a character beset by his own failings.

Our first sight of Straker, apart from the brief glimpses in the credit sequence, is in that scene where he is on the plane with Henderson. Big, bluff, supremely confident Henderson. General James Henderson: a man who acts as if he has the whole world at his beck and call, sitting there, smiling relaxed. And there is Straker, clutching that briefcase as if his life depends on it, every move of the eyes showing how uneasy he is, how nervous. Not a man who is assured of his own abilities.

That moment when he steps into the doorway of the plane says it all. Henderson gives a casual salute and almost skips down the steps without even looking up, then we see Straker stand there, look around as if wary, unsure and he takes a deep breath. You can FEEL the nervousness in him, the tension. This is not a war-hero, a confident fighter pilot or brash and cocky test pilot, like Paul Foster, but instead we get an insight into a man who is both dedicated and driven by duty. This is a scientist, a thinker, a man who has seen things he can’t talk about and who is now involved in a world of secrets and intrigues.

Once inside the Rolls Royce he is still on edge, eyes suspicious, and that look of concern, almost questioning disbelief, that he shows when Henderson tells him to open the case may be over so quickly that you hardly notice it, but the whole scene shows us his caginess, his mistrust.

That moment when he is flung from the Rolls also serves to show us a man, not some superhero who leaps up in an attempt to rescue others. No, this Ed Straker is mortal, and he lies there, bloody, trembling and scared. It’s a brilliant portrayal. 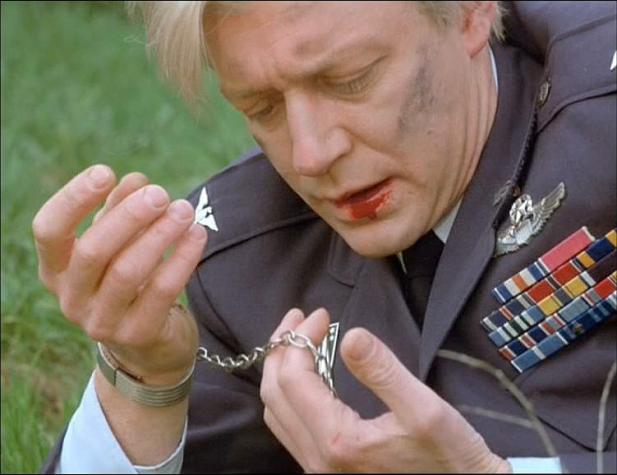 Ten years have passed before we meet him again, and has the passage of time changed this man? Our initial impression is that this is a totally different Ed Straker, suave, confident and macho. Time has transformed him. Or has it?

The sleek car, that assured action of driving up and simply leaving it, door nonchalantly left open waiting for some flunkey to hurry out and take over. These are the deeds of a self-assured, influential executive, a man who is sure of his place – at the very top. So dissimilar from that hesitant pause at the top of the aircraft steps and that long look around as if seeing England for the first time.

But: take a closer look. The body language tells us something entirely different. Straker gets out, flings his cigarette away almost in disgust and then… that defining moment. The tug of the jacket.

That single action was repeated time and time again, and it’s not the action of someone merely straightening a jacket. It’s as if he is checking the invisible armour that he is wearing, in a vain attempt to prepare himself for what is to come, and it seems to be a nervous twitch as if the habit has become ingrained over the years, a defence mechanism. And so the perceptive viewer will see that this is still the same Ed Straker. Only the outer trappings have changed.

The walk through to Miss Ealand’s office emphasises that. He strides, head down, only giving the briefest of acknowledgements, those revealing eyes concealed behind sunglasses – yet another barricade to protect him from the outer world.

It’s only when he finally goes into Miss Ealand’s office that we see him relax. That one picture of Straker, just as he opens the door gives us a glimpse of a head tilted downwards and sideways as if expecting a rebuff, a curt retort or a reprimand. The hesitant schoolboy entering the Head Teacher’s room.

No wonder Miss Ealand seems so understanding and sympathetic. Ed Straker was, by this time a damaged man who was divorced, alone, and tormented by the need to keep his world safe. A man who had this role thrust on him without any warning (Confetti Check A-OK) and who no doubt accepted it, not from any desire for glory or power, but out of a sense of duty and responsibility, knowing that it would change his life forever, but that he had no other option.

And, despite his shortfalls, he has done his best, has given as much as he can, will give even more (Question of Priorities), and is prepared to give up his life if necessary. (Reflections in the Water, Timelash, Subsmash… )

Yes, Ed Straker was inadequate. He had his failings, his faults. But it was those flaws that made Straker a real human, a man we could believe in. Someone who even today has the ability to enthral and fascinate.

And above all it was Ed Bishop’s superb acting that gave us a character filled with depth and realism. He imbued Straker with that one rare quality that is so often lacking in today’s superstud, fake heroes.