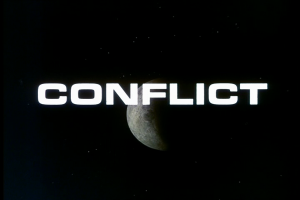 Ask any UFO fan to name their favourite episode. Destruction, Kill Straker! Psychobombs, Mindbender, Timelash. More often than not the action-packed episodes take centre-stage, with the character-driven CCA-OK and Question of Priorities a close second.

But some episodes slip under the radar, not as ‘bad’ episodes’ (are there any ‘bad episodes of UFO?) but ones that don’t get the recognition they deserve, ones that don’t immediately spring to mind. Perhaps because of the absence of new ‘hardware’ or location shots, or the lack of a notable guest star such as Michael Jayston, George Cole, Jean Marsh for example.

Whatever the reason, some episodes are overlooked through no fault of their own – great productions that deserve greater appreciation.

Conflict is one such example. It rarely gets much attention in the forums and yet if you take a close look at the script and plot, this turns out to be one of the most perceptive episodes of the whole series, showing – through excellent dialogue and direction – the real world of SHADO with its day to day battle against government interference and the need to be cost-effective.

The episode starts slowly, revealing an IAC ship on a mission to destroy ‘space junk’. It’s a rather topical subject nowadays, with reports as recent as Feb 2017 talking about Earth’s ‘Orbiting Junkyard’ with more than half a million objects larger than a marble orbiting Earth. And yet in July 1969, when Conflict was filmed, space exploration was still in its infancy and there was no mention of space ‘junk’ being hazardous to other spacecraft. Yet another example of the far-sightedness of the Anderson team and one more reason that their programmes continue to thrill audiences even after so many years. 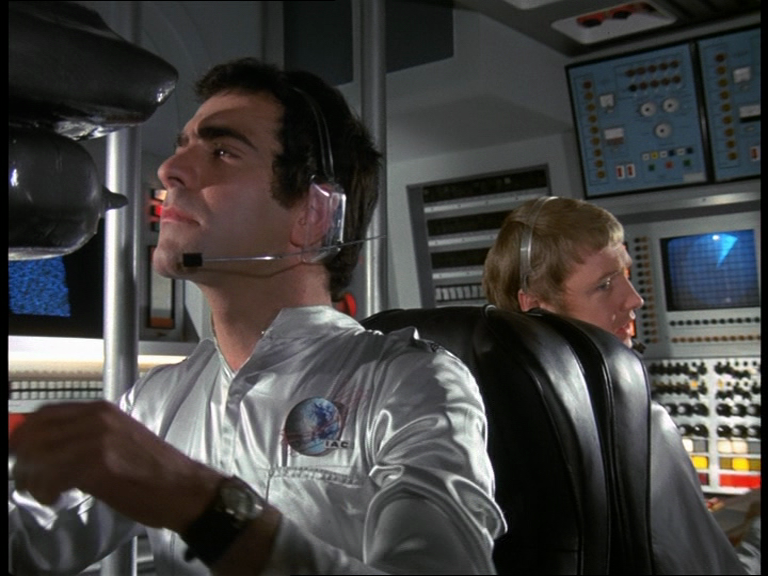 The interior shots of the IAC tracker craft are outstanding – the cockpit is meticulously designed and the whole scene flows with an elegance that belies the tension about to happen. We witness the destruction of Vostok 2 using a limpet mine, but there is nothing sinister in the scene and it is only when the IAC craft moves to its next target that we see the hidden menace – the alien device waiting behind the remains of the Apollo 8 S-IVB. 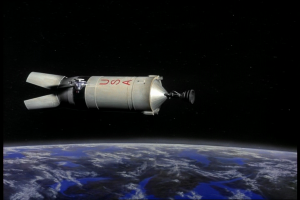 Personally, I love the fact that the writers didn’t allow the IAC to destroy the hulk – perhaps as a mark of respect for the space programme. Apollo 8 was still very ‘new’ in 1969 and I imagine that any programme showing the destruction of such iconic remains would have been met with more than indignation by the American audience. On a side note, the real Apollo 8 S-VIB stage was placed in orbit round the sun, thus presenting no further hazard to the mission. 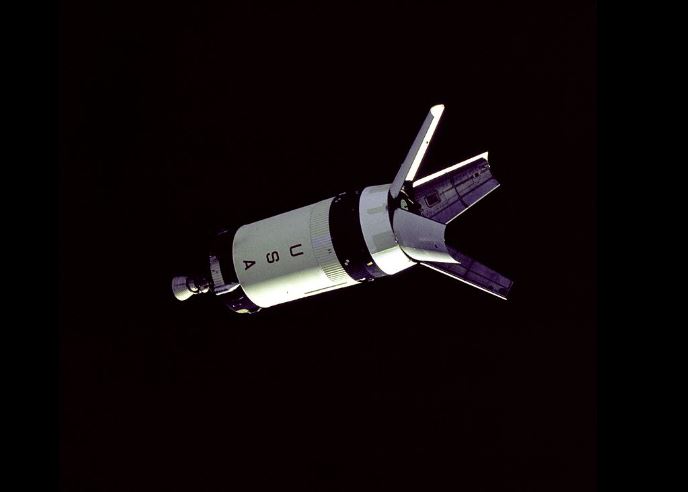 (Image from NASA: Apollo 7 S-VIB – Caption: note the similarity to the derelict in Conflict)

There are some great models in this episode: the IAC tracker ship seen previously in Computer Affair, the Lunar Shuttle and Carrier from three of the previous five episodes, but the Apollo 8 and Vostock 2 are new, as are both limpet mines – the one used to destroy the junk and the alien one.

The script brings us not only a taste of things to come but a hint of what has happened in the world of SHADO. The first shock is the sharp animosity now existing between Commander Ed Straker and IAC President James Henderson. The last time we saw these two men in Identified, they were in the Rolls Royce travelling to a meeting at Chequers only for their Rolls Royce to be attacked by a UFO. We are not even told if General Henderson survives. But here he is again, the man in charge of the International Astrophysics Commission and the one person who can wield any real power over Ed Straker.

On hindsight, the decision to bring back Grant Taylor as General Henderson may have been a mistake – not that Grant Taylor was not a brilliant actor, but because that animosity somehow ‘grates’ after Identified, and later on, after we have seen the early relationship between Henderson and Straker in CCA-OK there seems to be no basis for it.

But, as the viewer is informed, Straker has been a thorn in Henderson’s side for years. Who can say what may have transpired between the two men in that time. It is also further verification that SHADO has been years in the creation instead of something that was built in a few months. It is meant to give the viewer a sense of the seriousness and enormity of the whole set-up – and it works.

The plot revolves around Straker’s demands to have all space junk removed – a costly exercise that Henderson feels unnecessary, despite the danger to space flights. There is an immediate acrimony between the two men. Henderson comes across as brash and confident with all the trapping of success: the top floor office, the big desk, the Rolls Royce. It is Henderson who holds the purse strings while Straker has to beg for more time, more money.

Our first sight of Straker is when he is getting out of his car and going into the IAC building and all the signals speak of his unease: the shrug of the shoulders and the tug of his jacket, the tweak of the top button at his throat. 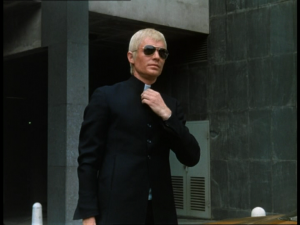 The story itself is fairly straightforward. Straker wants the space junk cleared, Henderson says it will cost too much and then goes on to tell the Commander:  ‘While I’m running this Commission I’ll fight you on this issue every inch of the way.’ A pretty hefty threat all in all but it sets the scene for the rest of the episode.

It’s not an action packed episode with space battles or aliens in the woods. Instead it focusses on the bureaucratic world of finance and red tape and political infighting. It shows the everyday, somewhat mundane work of SHADO: producing reports, supplying Moonbase, keeping the organisation ticking over. Nothing exciting, until the pilot of a lunar shuttle makes an error and is killed and Henderson forces Straker to implement ‘Washington Square’ – the total shutdown of all orbital flights.

Conflict was the sixth episode to be filmed after Identified, Computer Affair, Flight Path, Survival and Exposed. It was Michael Billington’s third foray into the world of SHADO and although he is beginning to find his feet in the studio, viewers can still see how rough his performance comes across at times compared to the smooth confidence of actors such as Bishop and Sewell.

We can see this ‘rawness’ quite clearly in certain scenes: particularly the outburst of anger (“Yes I say!”) in Henderson’s office which comes across as more of an embarrassment than anything. But this is early days for the actor and over the next episodes he settles into the role with a surety that equals most of the other actors. A subtext to the main plot concerns the relationship between Straker and Foster – the Commander and his protégé – and lets us see how initially, the SHADO Commander is still unsure of Foster’s loyalty. 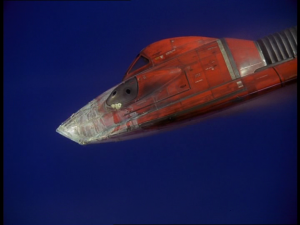 Foster decides to follow his instincts and pilots a lunar shuttle back to earth, contravening the order to ‘shut down’ operations in an attempt to prove that the first shuttle crash was not caused by pilot error. A tense journey, made even more dramatic by Straker’s curt comment at the end: ‘Congratulations, but don’t let my delight at your survival blind you to the fact that we have a few matters to discuss.’

The flight in the lunar carrier not only proves that something is affecting the flights, it also gives viewers another opportunity to see the wonderful docking procedure between the Shuttle and carrier.
Henderson sees  Foster’s disobedience as the opportunity to put the blame squarely on Straker’s shoulders, which the Commander accepts, but after Foster’s outburst in the General’s office, there is a very insightful moment when Straker – with a slight jerk of his head – tells Foster to sit down and then, in a moment of real deference, apologies to Henderson. 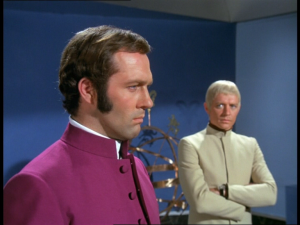 It’s a surprising moment, a heartfelt show of respect for the older man despite their enmity and Henderson responds with a genuine ‘thank you’. Is this the end of the conflict between the two men? It appears not, as Henderson then makes it clear that he has the power to have Straker removed from his post as SHADO Commander.

Conflict? You bet! And it doesn’t end there.

Straker realises what the aliens are planning and in a move that could be seen as reckless, orders the Interceptors to head for Earth orbit to destroy four pieces of space junk, leaving the way clear for any UFO. Even Alec Freeman questions his decision, but this is Ed Straker, the man who more often than not seems to have an almost prescient ability to predict what the aliens are going to do next.

There is a secondary scene in Straker’s film office which serves to remind us of the double world of Harlington-Straker and SHADO, and then Henderson confronts Straker with the fact that Moonbase and Earth are defenceless. It’s a potent scene – both men aware of the danger to Earth should a UFO appear – but Straker refuses to back down and orders a complete shut-down of the base.

It’s a moment of pure drama with the control room going dark and silent, operatives looking bemused and not sure what to do. The drama then racks up a further notch as Henderson orders Foster to take over command, but Foster refuses and steps aside for Straker to explain himself to the General. 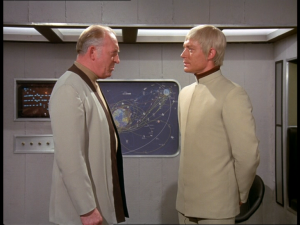 What is fascinating is how alike Straker and Henderson are. It was a clever move by wardrobe to have them wearing similar coloured outfits and the resemblance goes further than that. Henderson, for all his bluster and demands is just like Straker – both men putting the survival of Earth first. And it is Henderson who apologies this time – a heartfelt and sincere apology which Straker shrugs off before dismissing Henderson with the somewhat out-of-character comment: ‘If only you hadn’t been so positive that you were right.’

And Straker agrees; a slight nod of the head in agreement as he acknowledges his own failings.

The final scene, Straker offering to walk Henderson to his car, is perfect. These men may never be friends but despite that, there is mutual respect. There will undoubtedly be further conflict between them but when it comes down to it, they are still on the same side, fighting the alien menace. 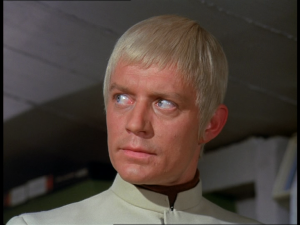