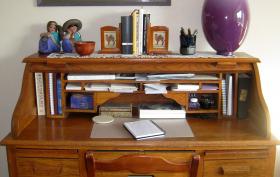 She looked up when a shadow moved through her peripheral vision. No business being there, the sightdogs all accounted for, no one else in the house. No one. Figment of her imagination that was. With a sigh she bent to her task again. It was hot, and humid, one of those summer days she did not much like.

“What do you listen to there?”

She was startled and her mood corresponding, so her question in answer was gruff and abrupt.

“What the hell do you want here?”

She turned around. Yes. No mistaking that voice and timbre. He was perching on the arm of the single leather chair near the couch, one slender hand caressing the large sightdog rolled up inside it. What made him wear her preferred colours and clothes again, she wondered. He looked much cooler than she felt in black jeans and a simple, yet crisp short-sleeved linen shirt.

“Wasn’t it you, who called me?” he asked, lifting an eyebrow at her.

“Two can play that game,” she laughed mirthlessly. “That’s ocean surf, two hours worth of it, recorded, from an area in France I like a lot.”

“Why do you listen to something like this?” he asked idly, half-turned towards the dog ruffling her ears with  both hands now, smiling at her ecstatic expression, tongue lolling, eyes firmly sunk into his.

She sighed, pushed the keyboard away and swivelled her chair around.  She was sure she had not called him, in fact she had studiously avoided repeat encounters for nearly a year. None of the dogs had barked, yet the injured red was seeing and reacting to him.

“That’s your fault,” he said, not even turning around. “These are why you gave me Calan, right? So they see me.”

She got up, not even asking, and fetched two mugs, large ones, the kind she used to drink from when writing. One with cream and sugar, one black. She walked over to where he sat and offered it, giving him a once over. He leaned back, submitting with obvious amusement to her inspection.

“It soothes me,” she said at last. No need lying, he would know anyway sooner or later.

With a thankful dip of his head he slipped elegant fingers through the handle, then blew onto the hot liquid frothy with cream and smelling deliciously of freshly brewed Arabica and caramel. An open collar today, she observed, and watched his Adam’s apple bob lightly as he swallowed.

“So you need soothing,” he made it a statement and lifted those piercing blue eyes to meet hers. “I guess that’s why you called me.”

Drawing a deep breath, another calming technique her mind whispered, she sat back down at her table. As if his presence could be soothing, especially here, at home.

“I’m not getting into any argument with you,” she said. “So what do you want?”

He turned around, fully facing her now, stretched his long legs and crossed them at the ankles. Fascinated she registered that he wore suede moccasin loafers, no socks, cut low enough to  show a tanned instep and a fine net of veins through delicate skin.

“You called me,” he said a third time, his voice quiet and containing more warmth than she had expected. “Weren’t you rather angry today? Is there something I can do?”

“Oh!” she made, then sighed. “I don’t think so. I’d love to have you barging in there, in full alphamale mode. Slap some respect into people who probably don’t even know what the word means.” She chuckled and smiled when he joined her. “But I don’t think it would help. I finally understood, really understood, what you mean to her. I was…”

She cast a quick glance at him, and for a splitsecond there was a look of unguarded affection playing across his features, one which he quickly hardened into his usual expression of tranquil composure.

“…feeling furious? And helpless?” he finished the sentence for her, and it was then that she realised that he as well had been very disturbed by what had happened. “Yes, I can empathise, even though some say I am a rather unfeeling bastard. I … like … her as well.”

She could not help but swallow when she realised he had switched words midsentence.

“Not that she doesn’t exasperate me at times,” he quirked a lopsided grin. “You know what she is planning to do right now?” She nodded and chuckled. “And a broken arm… she thinks I can’t hear her. But I do. I hear all of you, well, most of the time. And thank you for finding that lost voice again. I used to love it a lot, and now you pulled it back from the past.”

“Doesn’t it confuse you?” she asked, intrigued now. It was a startling revelation.

“No,” he answered, and shook his head, handing her the mug when she held out her hand for it. “It’s not as if I couldn’t choose, and also, I can always try to influence you a bit. Those of you who listen to me. So no, it’s not confusing, nor as bad as Lightcudder seems to think. I enjoyed the short foray into your fantasies. Very interesting. Very instructive.” She felt a rare blush heat her neck and cheeks at the unwavering regard from those clear blue eyes. In the end he could not hold onto his sternness and smiled. “You have a knack for finding me interesting mates. I give that to you.” He stretched and rose.

“Is there anything I can do for you?” she asked. “Well, within reason.”

He walked over to her desk, glanced at the screen, a tight smile on his lips, and then slowly started down the hallway. For a split second she contemplated warning him, but then thought better of it. If he was that curious, so be it. She knew he must have been burning to see it for a long time now. She could hear the muted shout. It took him longer to come back than going there, and for once those eyes were without their usual intensity, and turned inward instead.

She watched and waited patiently while he worked over what he had seen. Twice he started to speak, drew a deep breath and stopped. In the end she held out her hand, and when he took it, pressed his fingers, holding it for a moment.

“You never told me, that there is someone else!”

She lifted her hand to his cheek and brushed her fingertips across it in a soft caress, smiling still when she watched him leave the room.

Her palm tingled with the fleeting impression of his lips. 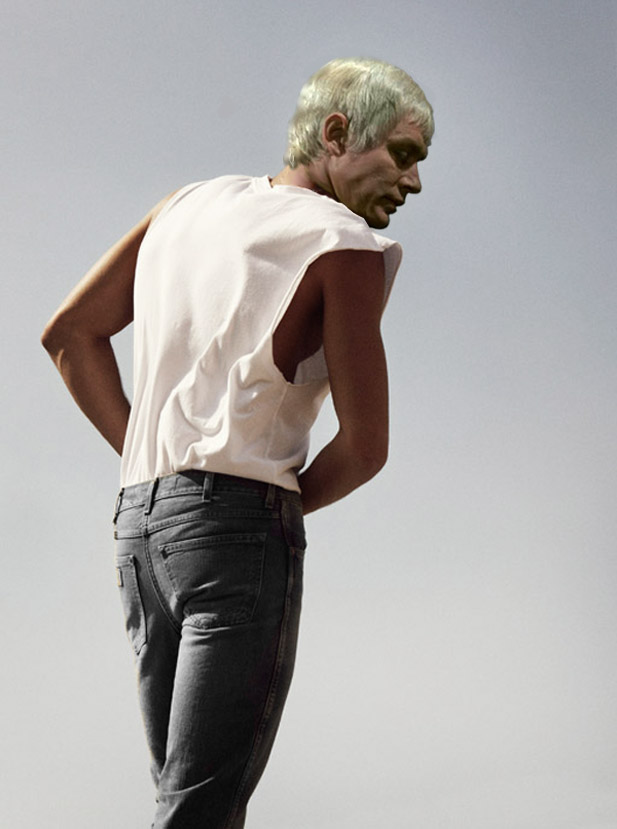