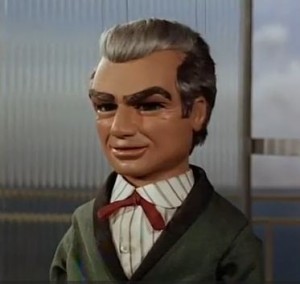 With heavy heart, Jeff Tracy called his family together for an important meeting. For so long, he had stood in the shadow of a Creator who inspired others to take up the light. Now he had to let his boys know that what might be the ultimate loss had been suffered. Still, there were other bright lights out there. Perhaps this was only change, not ending.

The Tracy boys entered the room, laughing and boisterous, teasing each other while exchanging information. Their eyes traveled to their father and they fell silent, on edge, waiting while the man looked them over with shadowed eyes. Not one felt he could voice the question they all had.

“I have something to tell all of you. I’m not entirely certain how this will affect us and International Rescue.” How the hell did he put this? Simply. That would be enough. “God is dead.”

After a moment of stunned silence, the boys broke into a cacaphony of questions and denials. He handed the eldest a sheet of paper announcing the death of an old man. Shock crossed his face as he handed it on until even the youngest had read of the event.

“Damn. God is dead …” he breathed before looking up. “But that doesn’t stop us, does it, Dad?”

The elder Tracy smiled at that. What created their world and lives might have passed on to where Creators went eventually, but the Tracy legacy and International Rescue lived on. The youngest stuck out his arm, hand palm down. The others placed their hands on his and finally, Dad’s hand was on top.

“Thunderbirds are Go!” they yelled in unison.

For all that was given us, for all that was created, smooth sailing Gerry Anderson. You are missed. May the next level be as creative and entertaining.