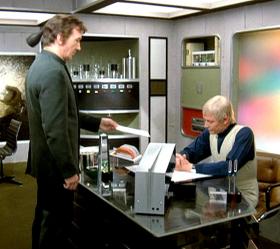 ‘Any particular reason? I mean.. does anyone ever go down there? The lower levels? It’s all distribution rooms and redundancy back-up systems.’

It was more than twelve hours before Alec Freeman gave any further thought to Room 5:28. The mobiles had flushed out the UFO and surrounded it, their weapons ready for anything, only to have the craft self-destruct, taking out two of the SHADO vehicles in the process. No casualties, just a mess. He returned to headquarters feeling depressed and the locked room was yet another annoyance. However much he tried to forget the door, the niggle persisted, like a jagged tooth attracting a probing tongue. Straker had not given him an answer or explanation, just sent him off on this mission, deftly changing the subject and brushing aside any further questions about Room 5:28. What was behind that insignificant door at the far end of the corridor?

The most irritating aspect was that Alec had only been down there on a whim, searching for any rooms that could be converted into spare overnight accommodation. SHADO was getting bigger, spreading its tentacles outwards far beneath the surface. Any unused space that could be converted to more practical use was a bonus, and Level 5 was not too deep to be inconvenient, though it was tempting to relocate Colonel Lake’s office there.

But why was that room locked? The thought kept intruding and, once the debriefs were written up,  Straker vociferously expressing his annoyance at the lack of success and in a softer tone his heartfelt relief at the lack of casualties, Alec wandered down to the room again intending to take a closer look and maybe get the door open. Nothing had changed; the door still shadowed by heavy buttresses, its lock, spyhole and handle appearing untouched since his last visit. The floor was dusty with disuse but he could see recent footprints in the grey dust, going into, and out of, the room. There was no one around and, pulling a set of tools out of one pocket, he set to work. 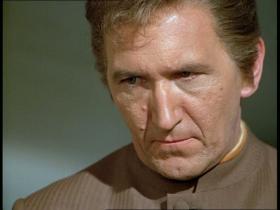 The lock gave way more easily than he anticipated, but the door refused to open as if other locks were in place. He peered through the spyhole but could see nothing and, annoyed and more than a little frustrated by now, he rattled the handle. It was no use and he gave it one last thump before walking away, determined to get an answer.

Over the next few days Alec Freeman kept a close watch on the lower basement levels, going down at random intervals: early or late at night, during his lunch break, when Straker was on Studio duty, even once at midnight, simply because he had been passing the studios on the way home from an evening at his local pub. But he found nothing. The door remained locked and unopened, if the small thread he had placed on the door jamb was any indication.

He gave up after ten days. Straker adroitly fielded any further queries with his own tongue-in-cheek suggestions as to what was concealed behind the door: Paul’s latest attempt at restoring an old Jensen Interceptor or perhaps a charnel house for long-forgotten alien skeletons, maybe even a sentient computer, isolated from any connection to the outside world and left there talking to itself in the darkness. Each suggestion accompanied by a raised eyebrow and a look of slight amusement, as if Straker was hiding the truth. 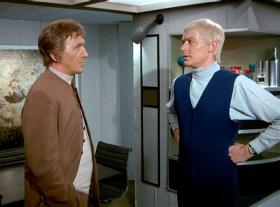 Paul could offer no useful information and the blueprints, when Alec finally found the relevant ones, showed only a blank space. In the end he took matters into his own hand and authorised the temporary installation of a security camera at the far end of the corridor, justifying it as ‘a precautionary measure’. The camera was well-hidden and activated by motion sensors, and even if it took six months, he would find out who had access to that room. And then he would find out what was inside.

The puzzle of Room 5:28 was the last thing on his mind a couple of months  later. Straker, edgy and tense, was pacing the control room waiting for Moonbase to come back online, or for SID to confirm the destruction of the lunar base. A terrible few minutes, no-one wanting to speak, to break that silence as if one word could be the catalyst. Alec stood beside him, not touching, just being there.  In case. That was all he could do. They’d be coming for HQ next – if Moonbase hadn’t survived.

There was a flutter of static…. a pause, a click and then…. ‘This is Moonbase Control to SHADO Headquarters.’

If this had been a scene in a Harlington Straker film there would have been an outbreak of clapping or cheering but this was SHADO. Everyone breathed out though, and Straker stepped forward, swinging the microphone round with one hand. ‘Good to hear you Moonbase. Status?’ Alec left him to it and went over to check the sensors as they came back online. 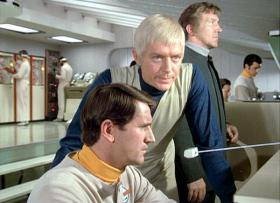 Late that night Alec Freeman put his coffee mug down, sighing with relief. Another day over and the aliens retreating empty-handed once more. A close call though and Straker was unusually pensive afterwards. Alec was used to that by now; the day had been hard on everyone and Straker would no doubt be his usual efficient self tomorrow. He yawned, preparing himself to finish for the night and go home, then a single flashing light on his desk caught his attention. The camera. Someone was there, in the corridor and approaching that  door. He hurried out, half-running down the staircase to the lower levels, loosening his gun as he did so although there was no need. He could have called security to come down here while he watched whoever it was in the corridor from the comfort of his own office, but he wanted to be there, to see that damned door open for once and be able to look inside.

He turned the last corner, moving with a little noise and as much speed as possible just in time to see a familiar figure place one hand on the door and lean forward to stare into the spyhole. A flare of light as if from the usual retinal scan and the door opened and Straker stepped inside before Alec was able to call out. The door began to swing shut and  Alec hurried forward, slipping his fingers into the gap and easing the door open a couple of inches to peer in. 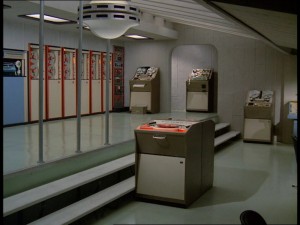 The room was larger than he anticipated, nearly as spacious as the Control room, and lined with computer cabinets. A second Auxiliary Control Room? And yet the systems did not seem to be functioning, or even powered down. Straker was standing a couple of paces inside slowly turning to inspect each console, unaware of the man standing so close. Alec caught a brief glimpse of Straker’s face, dark with …. fear? Or was it some other emotion? He watched for a moment, reluctant to reveal his presence in the doorway, but something, a sound or movement perhaps, made Straker turn in his direction, a look of absolute horror on his face now as he saw the man standing there.

Alec had no chance to move before Straker was in front of him, one hand pressed hard over Alec’s lips, his other hand pulling him out of the room. The door closed, and Straker released Alec’s arm and put his outstretched hand flat on the smooth surface. There was the  distinct sound of  multiple bolts sliding shut before Straker dragged him several paces down the corridor, finally releasing his hold on both Alec’s arm, then taking his other hand away for a  moment before pressing one finger to Alec’s lips.

‘Shhh..’ Straker murmured, shaking his head in annoyance. ‘You don’t give up easily do you Colonel?’ Straker’s voice was hushed and muted, as if he was reluctant to be heard, and yet there was amusement now in the soft tone, the look of fear no longer twisting the handsome face. ‘Well, you’re here now. I might as well tell you. You’d have to know sooner or later anyway.’ He led Freeman further along the corridor and then leaned against the wall. ‘Just… don’t say anything. Not a word until I say so. Understood?’

There was a seriousness to his expression that halted any thought of silly comments. Alec nodded, folded his arms, and waited.

‘I don’t often come down here.’ Alec strained to hear the faint words. ‘But with Moonbase….’ Straker closed his eyes for a moment then looked up. ‘They might win one day. You know that?’

Freeman nodded again, unable to take his eyes off Straker, standing there, blue eyes filled  with the knowledge of what might one day happen.

‘The IAC set this up. Not really my idea, although I understand the reasoning behind it.’

Alec raised an eyebrow. It was difficult holding a conversation when only one person was talking.

‘Sorry Colonel. You’ll understand the reason for silence soon enough.’ Straker gave a quick grin, but there was no mirth in the brief smile twisting his lips. ‘Okay. Room 5:28 is the IAC’s answer to what happens if the aliens take over SHADO. Simple as that. If, god help us, they ever invade in a large enough force to overwhelm SHADO’s defences, this base will probably be their first target. Not to destroy us, but to take control. With me so far?’

Straker took a deep breath. ‘5:28 is the last resort. If the aliens get into headquarters, I expect them to use any means possible to gain control of our operations. You know what that would mean. Total power. It can’t be allowed to happen. So.’ He straightened his shoulders. ‘All it takes is for me to say one word inside that room, one word only, and nothing will stop the destruction of SHADO. Everything will go. The base, the studios, all the links to satellites, and the satellites themselves. Everything. If it comes to it, I’d try to take as many of them with me as possible.’

‘As I said, I don’t come down here very often. It’s too dangerous really. It’s geared to respond only to me but I worry that a loud enough voice might activate it. Any voice. It’s foolish I know. Anyway, I check the systems on occasion, but they’re pretty much fool-proof. The bombs are built into the foundations, the trigger is powered by the reactor, not much needs maintaining. Just as well really. But  sometimes…’ He shivered and rubbed his face. ‘Sometimes I need to be sure. Especially after today. I thought …..’

Alec stepped forward and put his hand on Straker’s elbow, leading him away from the locked door, away from the thoughts of death and aliens and the end of everything. It was only when they were on the upper floors, far away from the dusty corridors of Level 5 that he finally spoke. ‘Can I ask  something?’