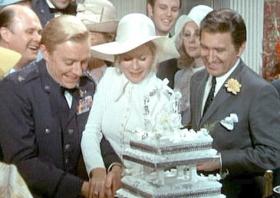 I get sick of romance stories, and the what seems to me fairly desperate attempts to marry Straker off again and again does pall. I used to read some of those stories – now I don’t. The more he is tied up in romance, the less like the real Straker he seems IMO…

…Glad I’m not alone in the please-don’t marry-Straker-off-again club. After I read a few of them I came to the conclusion he had been reduced to something resembling a cardboard cut-out. Straker has so many hidden depths – how anyone could devalue his worth in a flimsy romance story is beyond me. Oh well.

This is what readers write about the endless rows of stories which marry Straker off again, or invent past loves, whom he’ll follow to the altar at the flutter of an eyelash. I can very much relate to the reaction of these readers, for various reasons.

1. Chain of Command and basic In Character facts about Straker

The first aspect of this deals with marriages within the chain of command in a military body per se and with regard to Straker in particular.

The military forces of the various countries have an at times quite differing take on marriage or even just relationships within the chain of command, ranging from specific rules and prohibitions to no difference from civilian life. The strictest are the US American forces, no fraternization whatsoever is allowed within the same sphere of command, which includes even generalized prohibitions between officers and simple soldiers. A court martial and disgraceful eviction may be the immediate consequence. GBLT relationships are currently being legalized, but still meet with major homophobia. The British forces have no anti-fraternization rules and permit both marriage within the chain of command, as well as serving together in the same base.

The only exception to this are instructor/trainee relationships, which are strictly forbidden. Officially GBLT pairings are no problem. The Israelian and German armies handle things the very same way. The Australian forces as well have no anti-fraternization rules and allow couples within the chain of command, yet subtle pressure is placed on them to avoid the impression of favouritism and instructor/trainee relationships are strictly forbidden. GBLT pairings are no problem.

So, SHADO being an international effort, I personally would think a middle stance between the various armies might be in effect. I doubt relationships are that frowned upon as in the US forces, and as proof we have the acceptance of Col. Lake’s pairings, Freeman’s flirtations and Mark Bradley and Gay Ellis being a couple. At the same time I think that SHADO would – like all other armed forces – heed the instructor/trainee taboo, and I think they would not be accepting of direct chain of the command marriages due the legal repercussions and favouritism/corruption temptations.

As to Straker in this respect – he was shown to keep his hands very strictly off staff in canon. Not once, and there indeed were sufficient occasions shown in the series, did he react even as far as returning a come on in kind.

Instead, as Bishop later confirmed, he was sexually entirely uninterested in any personnel under his command. I very much doubt he ever would have readily and easily become interested in someone among the SHADO staff and if – by some wayward chance – it did happen, he would have removed himself or the other immediately, or would have declined the relationship. Entirely out of character for Straker are scenarios which show him in co-reign of SHADO/Harlington-Straker, almost like semi-royalty, with a wife. This being quite unrelated to the next point.

2. In Character, Canon and Straker Re-Marriages

The series serves us a hefty backstory for Straker, which includes a badly, quite viciously failed marriage, an ex-wife very quickly turning towards another man, a son withheld from him, a last name change of the son on the sly, a dead child and an ex-wife screaming at and accusing him like a banshee. Seriously, it is a wonder that he wasn’t shown coming out of this a misogynist, because that just might have been the psychologically valid reaction to such an amount of misery in conjunction with wives, kids and marriage.

What is established canon though is that he shows every marker of celibacy/asexuality. It would already take major doing to break through this mental/psychological barrier, and that it is there has been noted not just by the creating actor, but also by quite a few rather neutral reviewers of the series. To blithely assume Straker would marry off again is doing the character and Bishop’s characterization no justice and would be quite OOC (out of character).

Straker has been shown to be logical, analytical, quite removed from general issues of convention or religion by the time the main series takes place and ruthlessly putting personal matters behind himself as well as others. His basic situation has not changed one little bit, if anything it is worse given SHADO now is fully active. Being logical the normal reasons for a marriage also do not anymore apply to Straker, and he’d be aware of that.

All the above – put together – make a re-marriage of Straker, quite differently from how this topic is treated by many writers, highly unlikely, even if he actually engaged in another relationship in the first place. To anyone who a) loves the UFO characterizations of the actors and the producers/directors/writers and b) loves to read something written with a basically intelligent and interesting plotline, such stories are grating so badly it hurts.

Thus, if there is a need to provide Straker with some comfort, and yes, the wish to do that is understandable, then please in a realistic way (marriage as commonly depicted so far is the most unlikely of  all possibilities) and if possible in an interesting way.

If that also meets the fact that we are dealing with scifi here and at the very least one ought to look hard at the development of personal relationship and families in society, then hooray. Lovely e.g. the way that Star Trek solved the Kirk-needs-a-son dilemma. What we get served by the pros there is a broken up relationship, a single mother who decided to keep a chance kid and raise it, and a father who – when asked to stay away to not compound problems for the kid – so does. That’s pretty modern thinking, a very adult way to handle the topic and it is a whammy for the audience when we learn about it.

Maybe it is the age bracket which has UFO writers give modern tendencies so little credit. One however would hope that a writer, even if older than the current generation, has his or her finger on the times. As that reader above said, there is such a depth to Straker that it should pose no problem coming up with more ingenious ways to stave off some of his loneliness. 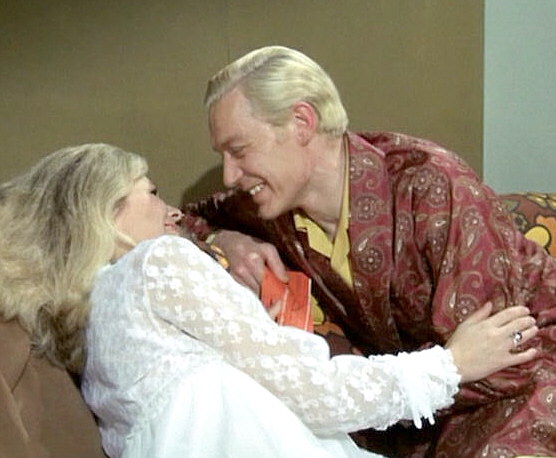 While we are talking about Ed Straker and canon, it should be so noted, that his marriage initially was a very happy one, well into the first year or two of building SHADO Headquarters. While it might be more to the liking of writers taking the easy road to vilify or cheapen his marriage with Mary, it is and remains established canon, that Straker married her breathlessly and shyly in love, adoring the ground she was walking on and quite clearly having fallen in love with her in a way which is more than just a little bit innocent.

This means that raunchy prior affairs, love affairs (sometimes including children) squeezed into the short time before this marriage and his ability to marry and support a wife at all, are very unlikely. Canon tells us differently and it is a cop-out to talk down the one first major love of his life. It doesn’t matter that he later came to see things differently: when he married he very much was in love and happy with Mary!

This is part of his backstory, of his characterization and of why Straker became who he was in the series. Don’t take that from him just because you wish to accommodate something which is not canon to begin with or are too lazy to correctly set up in realistic motivation. A pet peeve by the way among just about any fandom!