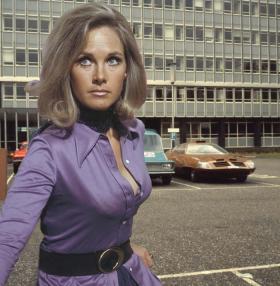 For several days, Alec Freeman had felt eyes on him; someone watching him until he could have jumped out of his skin at being addressed by a friend. The feeling preyed on his usually steel nerves. Even his boss, Ed Straker, had noticed there was something amiss.

He let out a brief laugh, rubbing the back of his neck nervously. “Yeah. I’ve felt like I’m being watched for … damn, for almost a week. Security’s got nothing. I haven’t seen anything, but …”

“A week? Over work? We have been pulling extra time with Lake out sick.”

“Maybe.” He thought about it. Odd, the feeling started the day Lake called in too ill to work. Maybe he was just tired, spooked because Ginny Lake was never ill for very long. She was under the care of a civilian doctor because the illness had started while she was visiting a site in Eastern Europe that looked to be a good place to set up a relay station. “Yeah. It’s been a long week with four incursions and no Ginny. I’m gonna call it a day and get some rest. Call me if things break again.”

He walked out to the darkened parking lot. Most of the studio people were gone already; they’d shut down the evening shoots with some story about a safety inspection. Halfway to his car he stiffened. There was someone out here with him, someone stealthy; someone moving in silence toward him. Alec loosened his gun in the holster under his left arm.

“Why Alec, I didn’t know I frightened you.”

“Yes,” she answered, her voice practically caressing the word as she stepped forward from the shadows.

Alec felt his breath catch in his throat. Virginia Lake, brilliant engineer and physicist, had always had a presence that made most men lose coherent thought for a few moments upon meeting her, but this was different. Her presence was like a physical touch even with her standing several feet away from him. Alec could feel his reactions to her. He stepped forward, his mind unwilling, his body seemingly under someone else’s control. In a moment they were so close that onionskin paper would not have fit between them.

“Alec,” she breathed in his ear. “Dear Alec,” she repeated in sweet seduction as her hands ran over him.

He pulled her to him and let his hands and mouth do any talking that needed to be done and damned if she didn’t urge him onward. What happened to the professional paramilitary woman who’d brushed him off so easily when they first met? Where was the friend he’d made since then? Where was the ice to his fire? Apparently, melting and heating up.

He bent his head to her throat, to trace the sweet line of the arch to her shoulder, her collarbone, to the gently rising mound of her …

“Alec,” she whispered again. “Come to me. Let me taste you now.”

The last was an order. “Of course, “ he responded without thinking, looking up into the pale eyes he suddenly did not know.

Ginny’s eyes were gold, slit pupiled, alien as the ones that sped across space to take organs and lives. Her lips pulled back from fangs … fangs? His mind froze. Fangs. Oh, God … Ginny … He wanted to scream, to strike back, to save himself; but that was only his mind. Alec’s body yielded to the creature that wore Virginia Lakes face and body, yielded to the sharp pain of her bite; to the sensual arousal of her gentle slurping of his life’s blood. In the end, he cried out as he had with other women, release shaking him and pulling him into the darkness.

Alec Freeman’s last human thought was that he was right to be afraid, but that this was not the end, just another beginning.