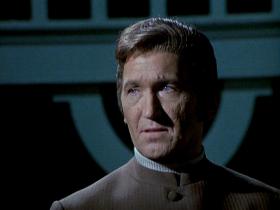 “Security, sir. Col. Freeman left the premises over an hour ago. His car’s in the lot still, along with his gun sitting on the bonnet.”

Galvanized Ed was on the phone to security for a full report. Within minutes he was at the scene and was as baffled as his security personnel. The surveillance tapes showed Alec walking toward his car, stopping and then nothing, just the empty lot. Security wished Ed would yell, the cold fury was harder to take.

By morning, most of HQ knew that something had happened to Alec Freeman, something inexplicable unless their opposition had figured out invisibility. Ed Straker was on the warpath to find out who made the mistakes that cost them his second-in-command and best friend.

Ed collapsed on his office couch feeling ancient and empty. There was absolutely nothing he could blame, nothing he could fix that would explain Alec’s vanishing. He lay there blank. The reports showed the equipment working perfectly. His security personnel were … blameless. There wasn’t even a hiccough anywhere that he could pinpoint as where the systems in place failed his missing man. A shiver passed through him. If the aliens could do this, the war was over. They were useless. He fell into vaguely uneasy dreams that were disturbed by his phone.

“Straker,” he barked as he grabbed the phone handset and nearly dropped it.

“Ed …” Alec’s voice was a pale shadow of the firm presence Ed knew. “Ed, it’s Alec,” he tried again, his voice barely above a whisper.

“Don’t know. I’ll … leave the line open. Trace it.” There was such a long pause Ed thought Alec had gone. “It’s not … aliens … Ed. Ginny … “ The handset on the other end was set down carefully and Ed could hear Alec moving off, a strange shuffling sound, as though the other was weary beyond reckoning. The sounds tapered off.

Keith Ford, suffering from sleep deprivation, was at the door before Straker’s yell finished. “Sir?”

“We’ve got an address. It’s … on the London Docks, sir.” Ford sagged against the door frame. “We can have the mobiles out in 15 minutes, sir. Sky Diver 3 is off the coast and sending in Sky 3 for support.”

Straker nodded. He realized that Ford was just about unconscious. “Johnson here?”

“No. Tell her she’s to take charge here. You get some sleep. That’s an order, Lt.” Ed dismissed him to get moving.

“Yes, sir,” Ford sounded all out and grateful.

Straker joined the mobile unit long enough to get directions and tagged along in his own vehicle. He missed having Alec with him, but it was Alec they were about to rescue. At least he hoped they were about the rescue. The London docks were a rabbit warren of warehouses and ancient alleys, some of them a century or more old. While they had an area to search, they did not have a specific point of origin for the signal … yet.

Alec wandered through a bizarre museum of a warehouse. The place seemed abandoned, yet there were stacks and piles of luxuries scattered about the place. He had left the phone line open in the small office above the warehouse floor. The office confused him. The desk was an ancient oak monster of the roll top kind, the sorting bins inside it filled with rotting papers. Yet the phone and the chair that stood before it were quite modern.

“Alec,” Ginny’s warm voice throbbed in his head. He looked to where she reclined on a black velvet divan, stretched out at ease, one long leg slightly lifted, knee bent, hinting at the treasures he might find should he join her. His belly cramped. Alec knew it had been less than 24 hours since he last ate, yet he was starving, quite literally. His teeth ached, his mouth was as dry as the tomb he belonged in. Painfully, he went to her because to ignore her call was to invite more agony.

Virginia looked at him out of eyes that held some understanding. She extended her wrist to him, her skin pale and soft, the heavy vein that fed her hand calling to him. He turned away. “Alec.” Her tone was sharp. “You must eat.”

“Or what? I’ll die?” he gave a dry laugh. Wasn’t he already dead? He nearly doubled over from the stabbing pain in his belly, squelching the desire to cry out.

Ginny moved to run her arms around him, nuzzling the side of his neck where two deep punctures showed black against his skin. She licked the wounds drawing shuddering moans from Alec. “Feed,” she insisted. “Drink. My blood will not complete the transformation, it will only sustain you for a little while,” she whispered.

Unable to control his hunger, Alec grabbed her arm and sank his fangs deep into muscle, licking up the quickly welling fluid, staving off the need for mortal blood. He pulled away from the tainted lifeline to lean back, his head cradled against her chest. “Ed,” he croaked, his eyes focused on nothing.

Alec nodded. “I called him … I couldn’t … “ He closed his eyes and wished he could weep over his betrayal of his commanding office and best friend. Lake smoothed his hair, stroking his forehead with slender, chill fingers.

“It’s all right, Alec. It’s not a betrayal. Ed will want what I can offer him. Trust me, he will want this …”