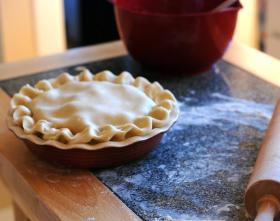 One of the joys of writing fan-fiction is that we are presented with a series of ready-made characters, backgrounds and scenarios that, if combined with care, will result in a very appetising end product.

Remove outer packaging, pierce film and place in a pre-heated oven (Gas Mk 5) for 40 minutes. Ensure contents are piping hot before serving. We have the ingredients prepared and ready for us to use. All we have to do is to mix them together. If we do it with sufficient thought, and follow the instructions then, in theory, we should be able to create a masterpiece.

If only it was as simple as that.

Take an apple pie for instance. Easy. You make the pastry, you prepare the apples, you put it all together according to the recipe. And you bake it.

BUT .. get one thing wrong.. not enough sugar, the wrong flour, bad apples, an oven that is too hot or too cold and you are left with an unappetising and inedible mess. Something that no one wants to eat. It might even appear perfect with its golden crisp pastry, the lovely smell of apples, but when you bite into it you discover that the cook has used salt instead of sugar. Well they look the same don’t they? Who is going to notice the difference? And .. once it’s made. ….will the chef care anyway? It’s out of the kitchen, out of sight, and on the shelves waiting to be sold.

And there will always be someone who will nibble the crust and smile and say..’Mmm, delicious’, without actually daring to be brave enough to tell the truth and say.. ‘Eugh, that is disgusting.’

So the chef gets away with it, time and time again.

It’s like the slovenly disregard and lack of respect for the reader that afflicts many fan-fic writers.

This is the problem with fan-fic. It’s too easy to try to use our own elements with characters, to make them into something that they are not. Like trying to make an apple pie when you only have gooseberries. It might look good and taste nice, but it’s not apple pie and if you ‘sell it’ as apple pie then you are lying. You are cheating your customers. And the word will spread so that very soon people won’t even bother to try what you produce, because they can’t trust you to create something good, something satisfying, something that people will want to ‘taste’ over and over again. It doesn’t bother me if people want to write 3D stories (Dire dross and drivel) but it eventually impacts on the rest of the writers who agonise over every phrase, and work to get their final product as well crafted as possible. If enough poor stories flood the market, people stop reading.

Then good writers stop writing and no one wins.

We need to look at some of the facts, the ‘components’ that make up UFO fanfic.

This is the ‘canon’ aspect. The basic grounding that all UFO stories should have. The ‘nuts and bolts’ for all UFO fanfic writers. And the stumbling block for them as well.

If you write your own original fiction you can create your own recipe, combine ingredients in whichever way you choose. Chocolate and Marmite (and it is actually very tasty!) or ice-cream and green beans. You have the freedom to ‘do your own thing’ to invent your own gourmet meal for others to enjoy.

But unfortunately, fanfic is too often treated as ‘fast food’. A quick alternative to slaving over a hot stove.

Let’s consider the worst mistakes made when preparing your fan-fic feast.

There you are, with all those wonderful ingredients just waiting for you to mix them together.

How can you possibly fail?   Oh boy… and yet so many have failed.

I don’t think anyone would write a story in which John Straker survived his accident ( oops .. I have, but it might never see the light of day!!) and expect anyone to take the story as canon. We KNOW that John died. Just as we KNOW that Ed Straker was once married to Mary and that he is now divorced from her. It’s there, on the screen. In front of you. (Oh? So you don’t actually watch the episodes anymore? Are you still relying on those warped preconceptions you gained when you watched the series in 19……. whenever? Not good. Not good at all.)

It’s those certain ‘physical’ facts that are so easy to establish. Alec Freeman has known Ed Straker for at least ten years, (Confetti Check A-OK) and is a competent and reliable second-in-command (Survival and, yes, in Responsibility Seat). Straker suffers from claustrophobia (Subsmash), lives alone, (Responsibility Seat, Question of Priorities), was a Colonel in the USAF (Identified, Exposed). All easily verified, all clearly evident. As Straker said in Identified ‘Facts’.

It’s when we come to the less obvious aspects of canon that things so often fall apart, that the recipe no longer works.

Let’s take one small detail. Straker drinks champagne at his wedding and gets drunk. In Identified and Kill Straker he says that he doesn’t touch it, and yet we see him in another episode drinking alcohol in his office with Alec. In The Responsibility Seat he doesn’t drink the wine he has bought, and also drinks tomato juice in the bar while he is trying to track down Jo Fraser. So . Two instances of him drinking. Several others of him refusing. And some people have leapt to the conclusion that this makes him into an ex-alcoholic. No. An ex-alcoholic would not have alcohol in his office, would not pour a drink for his friend, would CERTAINLY not have just one drink at the end of the day. In fact there is no such thing as an ex-alcoholic, just an alcoholic who is not drinking – today. THAT is the reality.

It is far more probable that, as a USAF Pilot he simply didn’t drink, that it was easier not to, especially with the strictures on flying times and alcohol.

So, no ex-alcoholic Straker. NOT because I personally don’t like the idea that he was an alcoholic, it is because the facts as we know them DON’T FIT.

That is the crux of the matter. Are you writing about the characters we see in the episodes, or are you writing about your own personal vision of Ed Straker/Alec Freeman/etc. The man in your story might have blond hair, chiselled lips, a cleft chin, be tall and slender, but he might be YOUR vision, seen through rose-tinted glasses, or even worse a skewed viewpoint that is based on your own secret fantasies (Don’t tell me.. I really don’t want to know).

I might be expecting ‘apple pie’ and instead I get gooseberry ..or even worse, rhubarb with too little sugar.

I don’t like reading stories that leave a sour taste in my mouth. And you will have cheated me.

Preparation: (Settings and Situations) A serious look at places and people, and how lack of research can lead to some ‘painful’ situations!