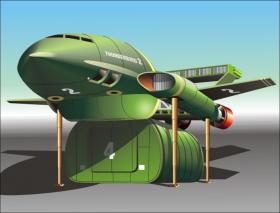 For someone that doesn’t even remember watching the Thunderbirds on television, I honestly have no idea how I started writing it. A quick explore sent me stumbling into the fandom, and before I knew it, I had fallen victim. Hours upon hours of reading gave me enough of the characteristics of the boys to start to know how people wrote them. Then, of course, it was borrowing the boxset off from a friend and the hours watching. To then only go out, buy the DVD’s myself and watch them all over again! What is it about the old 60’s style that makes them so gripping?

But once I found myself thoroughly hooked, that was when the writing began. There was something about writing Thunderbirds that just drew me in to the extent that two years later, I’m writing it just as much, if not more, than when I started. There is something about that particular fandom that gives you so much more scope than some of the others I’ve dabbled in before. Possibly because there are so many different angles you can approach it from! The initial decision of what verse you are going to write them in.

I have to admit, I’m a TV-verse girl all the way. But that’s not to say that I haven’t experimented in the movie-verse, and I know the film (despite sharing most fans views about it destroying what the Thunderbirds properly is!) has drawn in a lot of the younger writers and so allowed the fandom to carry on.

That’s not the only decisions that have to be made though. With a lot of other fandoms, you have your character, you have your setting, and that is it. The plot line is, of course, your own, but that is as far as you can get, limited by the scope you have. But there is something about Thunderbirds that widens that up.

Are you writing about International Rescue, or the Tracy family? Technically the same thing, but in writing terms, very different. Do you dive into the technicality of a rescue, or the emotional aftermath? Are the boys the faceless heroes that shoot off into danger with the hope of saving someone, or the playful brothers that would do anything for each other whilst acting the normal way that siblings do?

Or you could be even more adventurous and dive into their past, writing them as youngsters that don’t yet have the weight of the world resting on their shoulders? Besides, who can resist the mental image of the Tracys as children?!

Honestly speaking, I think that is what drew me into the fandom, and refused to let me go again. I know others find it the same most of the time. You don’t just have a limited setting in which you can write, you have a wide range of options that means each story is completely different. Not to mention the sheer number of characters!

Six Tracys – seven if you are including Grandma, with stubborn personalities and, in my experience, the refusal to do as the author wants. That alone gives you endless possibilities! But, of course, the Tracys aren’t the only characters! The “minor” ones have the clash of different personalities that keeps giving you more and more ammunition to work with. International Rescue’s sworn enemy being the half-brother of one of their closest friends? That alone gives you countless potential plot lines to work with.

I would say the main reason that I find that I keep writing Thunderbirds fanfiction is simply because you can do whatever you want. Watching the series, whilst the characters do have their own personalities, none of them are that well defined as such. You have the chance to play about, especially with those with less screen-time, and make that character your own. I found in reading, everyone has their own different interpretation, especially for someone such as John. Known to be the least featured brother in the series, I’ve read so many different interpretations of his character.

And the best bit? All of them are right! No one can say for definite that you are writing someone out of character. There is even the confusion over some of the ages, especially who is the second and third son. I’ve read it both ways; I’ve enjoyed it both ways.

What’s not to love about writing Thunderbirds? Not to mention it has one of the friendliest supporters that I’ve seen on any fandom. So why do I write it? Do I really have to give a reason, I don’t think I could narrow it down without going on and on for ages. Honestly? Why not? It kidnapped me that one day I accidentally clicked on the fandom title and that was it. I’m still writing, simply because I’m finding it almost impossible to stop. You have the chance to experiment with how things might possible be in the future, whilst working with characters that have been around basically longer than I have. It’s easy for new comers (yep, guilty of getting friends who knew basically nothing about it reading, and then in turn, writing), fun to play around with and, as cliché as it sounds, has given me the chance to write something different. Although to be completely honest, I’m not sure I have much choice in it. Now that I’ve started writing Thunderbirds, I’m not sure I can stop!!