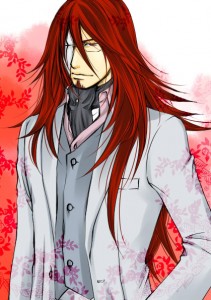 I am not an anime fan … don’t really know much about it (well, I can’t know EVERYTHING can I!). So an anime/UFO crossover poses some problems with me. I don’t mind crossovers as long as they are well written and the characters are believable ( Oh, and the situation is believable – I simply couldn’t read – without hysterical laughter, a crossover such as UFO/Murder She Wrote or perhaps UFO/Little House on the Prairie. ) However, I am familiar with dragon’s style of writing and as she has the ability to depict the characters with a great deal of empathy and due consideration for canon, I started to read expecting that I would feel a little out of my depth.

D Grayman. Who is that? But it doesn’t matter. By the third paragraph we are in familiar territory. Keith Ford makes his appearance. If there is one UFO writer who really understands Keith Ford, it is dragon. And she does not disappoint. She gives us a Ford who is proficient and reliable and then Straker arrives and leaves Ford to do the work, knowing that the man is competent. A couple of delicious touches as well. Casual mention of Straker’s emotional state:

Ed Straker, ignoring the claustrophobic part of his mind that disliked the suit he wore, moved to join the younger operative.

and Ford proving that Straker’s trust in him was justified:

There is something so simple and yet so ‘right’ in that account. A very visual scene. Ford, kneeling there and looking up at Straker, and then carrying on with his task.

The mystery continues. And I suppose any readers who are familiar with D. Grayman would understand all that is described, but it is an unknown world to me. However, the story works. I always like dragon’s original characters and Bev Devereau and Hinakai Moritsu are delightful. And not a Mary Sue in sight!

One of the main problems with a cross over story is that so often you end up with two alpha males squaring up to each other and fans can feel that ‘their’ favoured character is unfairly treated. There tends to be some bias towards one character by the author and this can leave a sour taste. I was half expecting ‘Red’ to be the ultra hero, the man who outclasses Straker. But I need not have worried.

Red is a fascinating character, an unknown to me and I found myself drawn to him, not because he had super powers, or incredible intelligence, but because he was a person. Believable and realistic. (errrr….. can an anime character be ‘realistic’?)

Flashes of memory reflected in the shimmering surface before him. A child with gray hair, a scarred face and a … monocle? A laughing gray skinned man and a clown followed swiftly. He was filled with sorrow, yet the child also knew joy.

What beautiful writing. What a delight to read. But it is not just Red who is good. Here is Straker.

”I want security as tight as possible, just in case.” He no longer worried that Red was an alien operative, but the sudden recovery of a lifetime of memories in an unfamiliar place, including whatever gave him the scars he bore could be as traumatic as the damage that left him with amnesia.

Ed Straker. You can hear his voice there, as you can hear Jackson in his scenes. Damn, I like Jackson. I never used to. I always thought of him as a slimy little oik, ( yes, it is a real word) but he has grown on me over the past year, and when he is drawn as well as this he adds so much to the story.

“Unfortunately, yes, Commander. Red, for want of a better name at the moment, was not apart of the cosplay group and was not damaged by the aliens. There is nothing to indicate he has any connection with the aliens at all, but there are no connections to anything else, either.” Jackson’s soft voice was troubled.

Jackson allowed himself a small sigh at that. “I am … possibly more aware of the difficulties for displaced persons than most in SHADO, Commander. We cannot just … turn him loose. He is not threat to us, as far as we have ascertained; but he is … “

See? Can’t you just HEAR Jackson there? Hear that drawl, that slow intonation; see the head tilted slightly, the brow furrowed, the fingers maybe touching his lips in concern? I love that ‘small sigh’.

There are some wonderful moments in the story. I particularly liked the little details about Straker’s father’s first marriage, with hints of how that might have affected Straker’s own outlook on life and religion. A deft touch.

The incident in the church after Mass made Red even more intriguing, and then we have this tiny scene (and I had to smile as I imagined the image!).

The door to his office slid open to admit the frequently diffident Lt. Ford and a sheaf of papers. The young man nodded to Straker. “Sir. I may have found something, although it is a bit .. well … odd, sir.”

Straker greeted that comment with a raised eyebrow as Ford set the papers on the desk and handed them over one by one.

dragon excels at this sort of writing. The ability to see a character for what they truly are, not as some people might depict them from just that one scene in Identified. Keith Ford has had a lot of stick from writers, and yet he was clearly very competent, if a little shy.

As for Red, well, there are some very tender scenes.

His good eye widened and he blinked at her, although a smile curved his mouth in a most distracting manner.

He reached out and cupped her cheek with his hand, concern in his manner.

He looked to the girl with him, no, small in stature she might be, but she was a woman in age. He smiled at her, wishing he knew more than her name and kindness.

And this bit!!! “Now I can appropriately thank you,” he told Bev and included Hinakai in the look he gave the taller woman.

So, it appears THAT ‘Red’ is really General Marion Cross of the Black Order. I did get a little confused there at one point as Marion is a feminine name and that threw me for a while, but I worked it out after reading on.

I like the deftness in some little things…. the way Ford subverts the people who are trying to trace who is searching for the Black Order.

With a trio of keystrokes, he side tracked the tail. A moment later it returned.

Frowning, Ford continued his search, noted it was actually the Vatican that was monitoring one of his search terms and quickly shunted the tail to a server for the studios.

It is that attention to detail that makes a story really work, makes a reader want to return to it again and again, and as I write this review I note that dragon’s story is the most read item on the Herald at the moment.

I am not going to spoil the story for anyone who has not read it. If you thought, as I did, ‘D. Grayman? Well I don’t know that fandom, so I am not reading it,’ then you have missed out on a truly excellent story.

Thank you, dragon. This would have made a great episode. And you have left it open for a follow-up!