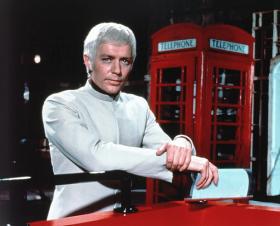 Javier and Xochitl Guerrero were techs extraordinary. They were also the exception that proves the rule. Married ten years when Col. Virginia Lake discovered and recruited them to SHADO, they were still married. While both were good Roman Catholics, they also understood that the mission precluded popping a baby a year, as did Xochitl’s health, so they had the three they were recruited with and busily adopted members of the SHADO staff instead.

The only issue Ed Straker had with the couple was that their religious foundation sometimes bemused him. Such was the case with their annual winter celebration of WeeWeeChu. Every year, the couple asked for the Winter Solstice off.

“What?” Ed looked at Col. Lake curiously. It wouldn’t have been so bad, but she was obviously hiding something, the gleam in her blue eyes told him that there was something up.

Ginny licked her lips and controlled her smile. “The Guerreros are aware that we generally do not take holidays into account, sir. However, we did recognize that given their deep convictions we might allow dispensations.”

Ed regarded her curiously. He sensed something was up. However, the Guerreros were phenomenal at what they did, gave no trouble on any level and did whatever they were asked, including time apart while one was on Moonbase or detached duty on the SkyDivers. “All right. What’s up?”

Ginny chuckled. “They would like winter solstice off, sir. That way they can celebrate the season, in the traditions of Xochitl’s ancestors and not make issues with the Christmas Day roster, sir.”

That was too many ‘sirs’ in one explanation coming from Virginia.

“You’re signing off on this?” he asked.

“All right,” he agreed and signed the leave request for the pair. “They do understand that in an emergency they will be called in?”

“Yes, sir. They are not planning on leaving the country, sir. Just … celebrating.”

Given Xochitl’s Mexican and Native American background, Ed thought better of asking what traditions were to be observed. Later, he might wonder if he should have inquired more closely.

December 20th their first year there, he was drawn from his perusal of a very bad screenplay proposal by Miss Ealand’s voice. Was that laughter? “Yes?”

“We have visitors, sir. Could you spare them a minute or two?” She was definitely laughing which was very uncharacteristic of her.

“I’m busy,” he told her, yet curiosity was nibbling at the edge of his interest.

“I really think you should come out, sir,” she answered him.
With a sigh that wasn’t heart felt, he set the screenplay aside and stepped out of his office to be greeted with the sight of the Guerreros in their Christmas Best, all five of them. Xochitl was a sight in full Aztec ceremonial garb including a feathered cloak dusted with snow flakes. Feathers were apparently as warm for humans as birds given the brief linen shift she wore beneath, traditional sandals laced up to her knees and gold adorning her arms and neck. She smiled at him.

“Mr. Straker, it is our wish to share our bounty at this season which is so important to so many,” she announced softly. Unlike Javier, her English was barely accented. “We wish to share WeeWeeChu with our companions and compadres here at the studio.”

Javier, in full Mariachi glory from a huge gold and silver worked sombrero to the silver conchas down the sides of his traditional trousers and cowboy boots of ostrich skin on his feet, beamed over the guitar he held in his hands. “Yes,” he agreed. “We weesh to make you geeft of our WeeWeeChu this season, to chare in the goodness and grace of de season. Chu will allow thees, no?”

Miss Ealand watched as her boss seemed to get a glimmer of what he’d been set up for as he took a seat on the corner of her desk and nodded to the Guerreros to continue. Javier strummed his guitar, tuned it slightly and they began:

Ed smiled at them and at the gathering studio personnel who had been attracted to the office by the music. “Thank you. That was delightful.”

“We could slaughter a few more,” Xochitl offered. “Although, I think that’s our best one. Javier is a very gifted musician …”

Javier, satisfied with his magnum opus was content to play and let his family sing. Thus began the studio tradition of WeeWeeChu.