The underground car park was deserted. Only Straker’s car and one other parked in random places between the concrete pillars. Dim lights flickered behind wire brackets, glinting on random puddles of water that had dripped from rainsoaked vehicles. Other liquids also marked the oil-streaked and begrimed surface of the roadway. Darker, more ominous puddles, reflecting the gloomy light in their thickening crimson patterns.

A desolate place, unfrequented and deserted this late at night, but not tonight. Behind the concrete pillars, close to Straker’s car with its still warm engine, the driver still warm where he lay slumped behind the wheel, a small group huddled. Two of the figures hunched at floor level, three others close by. Five of them. Or perhaps more truthfully, five who could be detected in the murky obscurity of the shadows. Who knew how many more were hiding, unseen, unnoticed, behind pillars, or in the dimness that spread between the vacant parking bays?

There was a sudden nightmarish sound of a stifled, smothered scream cut short, but the horror of the noise left a reverberating echo in the air before fading away into the shade and obscurity between the battered columns. Two figures still on the floor, but one of them now lifeless. The other struggling in the grip of arms that were almost inhuman in their strength.

He had been compelled to watch them, had been made to witness that terrible moment when the knife cut through warm, living flesh, arterial bright blood spurting across the gap to spray into his face, his eyes, to spatter on his lips. That unmistakable salt taste, metallic and warm. He spat, not with disgust. Never that. It would have been a rejection of Locke’s worth, as if Straker was spitting away the remnants of a human being’s last agonizing moments. But neither could he simply accept the taste, the feel of those last splashes of life. He struggled again, putting all his strength into his attempt to break free of the sinewy, rope strong arms that wrapped around him. Useless.

The hand holding his head tightened, gripped even harder if that was possible, red gloved fingers digging into his cheek, forcing his mouth open, holding his eyes wide to stare, to look. And so he looked, anguished tears filling his eyes, blurring his vision as the man was butchered with callous ease. As David Locke, the most senior member of his personal protection detail was sacrificed.

Straker spat again, in revulsion this time, in disgust, as Mason approached, smiling, victorious. ‘You know you won’t succeed don’t you?’ he said with utter contempt to the SIS officer.

The words sounded brave and assured but Straker was appalled by the ease with which Mason Rimmer had fooled everyone, including himself. The phone call to Straker’s house earlier that evening had been so convincing, so urgent. Rimmer even had the correct code-words. And so Straker had agreed to meet the SIS officer in London. It had all been a trap. Patterson, Straker’s driver, had been shot straight away. Too old to be useful to the aliens. Now Locke was dead and it was only a matter of time before Mason Rimmer turned his attention to Straker.

‘Straker. Don’t worry. I have no intention of killing you.’ There was a universe of hate and loathing but also of fear behind the last word. ‘My friends have other plans for you. Unfortunately. I would have enjoyed watching, enjoying listening to your screams. It has taken too long to get you. But now? Well, now all our tactics have succeeded. Freeman will see your body tomorrow.’ Mason looked down at his captive, ‘Oh not your body, that would be too… final, too easy. But he will have a corpse, and he will believe it is you. And after all, it will be you. A complete duplication of you, down to your genome. A perfect replica of Commander Ed Straker.’

‘You can’t fool Alec Freeman that easily, Rimmer. Despite your pathetic attempts to break into SHADO. He has more sense than you give him credit for.’

Mason creased his lips in a victorious smile. ‘Commander, I’d like you to meet….. well, I don’t think there will be any need for me to introduce you. ‘ He clicked his fingers and a figure stepped out of the shadowy darkness of the alleyway. A figure dressed in a dark Nehru suit, pale sweater, pale hair.

Straker froze in horror. Of all the things he had predicted, had anticipated, this was just unbelievable.

In that single heart-stopping moment of devastating clarity Ed Straker knew that he was dead.

London, late on a November night, was a multi-faceted city. Seen from above it was a complicated jigsaw of arbitrary blocks of light interspersed with dark patches where pieces had not yet been found and put into place.

A stranger, arriving here suddenly, might have found himself in one of those luminous areas where life continued at full pace, with no regard for the lateness of the hour. Streets filled with lights and noise and movement. A place where traffic and pedestrians weaved along roads and pavements, where nightclubs, restaurants, cafes, remained open, tempting tourists and late night revellers to enter. A place where only the presence of stars, unseen and unnoticed in the light polluted skies, indicated the transition of time.

And yet, not far from those gleaming jewel-like islands, with their sparks of lights and life, the city also had a quieter side. Silent, sleeping offices, with perhaps the odd, accidental and long-forgotten light still casting a signal high up in the darkened block, and a brighter area at street level with jaded security guards, reluctant, weary eyes watching monitors. A few passing taxis, the odd car. Nothing much happening.

London. Asleep. Resting in preparation for another early start.

An unwary stranger who wandered further away from these safe harbours, past the shelter of the watched and safeguarded environs, might find himself caught in the darker, abyssal deeps of deserted alleyways and empty, abandoned properties that spattered the city like decaying sores.

And it was to one of these desolate, deserted quarters that a police van was heading.

Lights flashing in rhythmical regularity, warning the wary traveller of dangers ahead, it pulled to halt by the roadside. There was no discernable reason for the presence of the van, no cars slewed across the road in the aftermath of a collision, no crowd of drunken bystanders, not even any noise. The road was bare of regular traffic at this time of night.

That incautious stranger, had he been there, might have paused to watch the van out of sheer curiosity if nothing else. Would have seen the doors open, the police step out onto the pavement with its broken flagstones and discarded rubbish snagged in the barriers that edged the roadside.

The police moved with the confidence and solidity of men who knew how to command. It was but the matter of a moment’s work to pull a huddled figure from the undergrowth and drag it, despite its rebellious struggles, into the muted dimness of the street.

Once under the glow from the dirt-encrusted lamp, the figure could be seen twisting in the firm grip that prevented it from escaping. A passing taxi, slowing down to rubber-neck the scene, prevented anyone hearing what was said to the figure, now lying restrained and face down on the filth-speckled, uneven slabs of the pavement. The van doors opened, and the figure, only now discernable as a man, was tossed, almost as if he was an unfeeling shop-window dummy, into the murky depths of the caged interior. Any stranger, passing by right then, might have heard one muffled shout of anguish, one frantic thump on the side of the van that made the vehicle rock once, but then the street was empty. The van hastened off, taking its catch away. 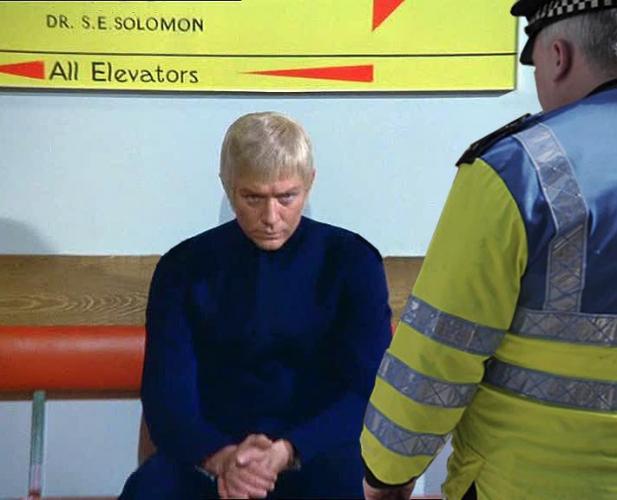 The nursing assistant wiped the marker pen off the board and rewrote the sign. Waiting time; Now 3 hours.

There was a mutter of discontent, a sense of disquiet, an unspoken threat that reverberated around the busy waiting room in A and E. Three hours. A long time. A very long time. One man, too drunk, too obese, too unsteady stood with precarious balance before moving towards the desk. ‘Three hours. Bloody hell…….’ but his thick accented voice was cut short by the chill draft as the main doors opened.

You could always tell when the police arrived, Dr Hartley thought to himself. There was a sudden indefinable hush in the waiting room as if all the patients were expecting to be arrested for any minor transgression and were trying to make themselves as unobtrusive as possible. And yet everyone would be looking to see just who they had brought in; maybe some victim of a mugging, or even, hopefully, a knifing. That was always a firm favourite in the waiting room. Someone who was worse off than they themselves. Blood and maybe a few moans, with any luck. The cops tended to bring minor knife injuries in themselves nowadays. Quicker and easier all round, and it didn’t tie up the ambulance service either.
Hartley carried on with his sandwich. The police, and their victim, would have to wait. He had more important things to do right now. He watched, his face impassive, uninterested, as the triage nurse directed the small party to a vacant cubicle.

There were still blood stains on the floor from the last inhabitant, but the new occupant was oblivious to the mess, the indication of just one more person’s suffering. He sat, deferential and submissive, doing as ordered by the tall figure who accompanied him.

The sounds of pain, soft moans, muted whimpers, a child’s shrill cries, all filtered through the thick curtains that separated this tiny oasis from the harsh world outside. Neither man spoke. The policeman, concentrating on listening to his radio, the man sitting sideways on the padded bench, feet on the small step beside it, absorbed in peering at his hands. Turning them over, inspecting them, twisting them to scrutinize every detail as if he had never encountered them before.

They remained like that. The blue-clad policeman, an intimidating presence in stab-vest and equipment, was serene, his feet planted squarely on the floor, waiting. Expecting nothing to happen. The years had taught him patience.

The man with him was also quiet, but not from composure. His silence, his unthinking compliance seemed to be more due to bewilderment than obedience.

The curtain pulled back. Hartley stood there, assessing, judging. Another waste of time, he thought with contempt, yet another drunk, another careless tourist who was unable to look after himself. He stepped forward, not bothering to close the curtain behind him, flicking through the manila folder with the cursory details that the police had provided.

‘Right. If you want us to treat you, we need to know your name and why you are here,’ he started.