The dim light in the alleyway pooled down onto the huddled figure. 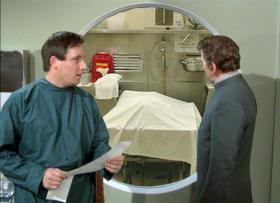 Late at night, in this less salubrious area of London, there were few late-night revellers. Not even an insomniac dog-walker. But the man had been spotted nonetheless. It was dealt with in the usual efficient manner. Photographs, forensic evidence, SOCO’s. Processed, collated, labelled. Then the body removed to the central morgue for the next step. Formal identification and cause of death.

Frowns, worried voices, urgent phone calls. And Alec Freeman found himself driving, late in the night, in answer to the command. He did not question the instruction. Freeman was used to obeying  awkward orders, but he was troubled. Why him? Why not Ed Straker?

His pass let him through the security barriers, and he followed the silent guard down corridors that were empty at this late hour, to a small room, the colours on the wall soft and  muted, and a window in the wall dividing  it from an adjoining, larger and very  clinical room. Alec felt sweaty, clammy with fear, with apprehension, and with that indefinable certainty that something was most definitely very, very wrong.

There was another man  in the room,  his back to Freeman, staring through the glass partition. Alec stepped up beside him to see,  in the adjacent  room,  a mortuary table. Green cloth covering an unmistakable shape. Freeman moved  closer as the attendant lifted the cloth and folded it back  to reveal the face beneath.

Ed Straker. Freeman sagged against the window, one hand reaching out, his voice faint and threadbare. “Ed.  What happened to you?’

The man turned to face him. ‘The initial examination of the body did not reveal any obvious cause. So, you have no idea why  Straker was in London last night, without his protection detail?’

‘No. none at all. He was going home when I saw him last.’ It was hard to get the words out. Ed. SHADO Commander, Ed Straker. Dead.  His friend, dead. ‘Where was he found?’

There was a pause. ‘In an alleyway. No signs of a struggle, not even any bruising  on the body.  But the autopsy will no doubt reveal the cause of death.’ He held out one hand to Freeman. ‘Let me introduce myself. Mason Rimmer. SIS. Currently  in charge of overseeing  security and protection with regard to persons who are considered to be politically important. Mr. Straker was one of my responsibilities.  His death is a  matter of grave concern as well as a severe  embarrassment.’ Rimmer gave a brief, cursory glance through the partition at Straker’s body, ‘Straker had two members of his protection detail assigned to him last night. There has been no contact with either of them. I must assume that they are also dead. Now if you will excuse me.’ The SIS officer nodded  a curt  farewell and left.

The bleak grey corridor stretched in front of Alec Freeman, the  glass partition on  his left separating him  from  his friend now  lying on a cold hard  stretcher behind that barrier.

Dear God. Ed. The finality thumped into him like an unexpected  punch to the stomach, with almost the same effect. He struggled for breath, almost vomiting with the sudden realization of what had transpired. His heart pounding with the rush of shock of adrenaline flooding through him, he placed one shaking hand on the  glass, as if that simple contact could awaken his friend, could make the man on the table push himself  upright, open his eyes,  turn to his friend and smile, that slight, quirky, too seldom-seen smile.

But Straker was  unmoving.  Lifeless, and; Alec could hardly bear to think the word but it filled his mind despite his protestations; dead.

He turned away, sickened and  distressed. One shoulder against  the bare wall, head leaning against the rough concrete as if it was an effort to even hold that upright,  he reached into his breast pocket,  pulled out his mobile and dialled, although how he was going to tell her, he had no idea at all.

He tried to speak, tried to remain focused, but his emotions betrayed him as he struggled to force the words out. ‘Miss Ealand, it’s….. ‘ he stopped, his voice stifled  in his throat.

‘Mr Freeman? Are you all right?’ the concern in her voice was almost too much to bear, but he took a deep breath, clenched his fist around the phone and enunciated each separate word as a drunken man might speak. It was the only way he would be able to get the words out.

‘Mr Freeman, are you all right? Do you want to speak to Mr Straker? He hasn’t come….’

‘Who? Who is?’ her voice sharp, shocked, curt with awful premonition.

And finally, Alec Freeman, aware that he was now acting  Commander-in-Chief  of SHADO, composed himself, straightened his stiff shoulders in a vain attempt to loosen them, one hand tugging at his jacket in an unconscious imitation of the man lying there, cold, still, breathless, in the stark silent room and he answered her.

‘Miss Ealand;  I’m sorry. I’m so sorry. Ed Straker is dead.  I don’t know what happened yet; I’m at the medical examiner’s office right now. I need you to notify General Henderson that Commander Straker’s body  was discovered  yesterday evening in suspicious circumstances.  I’ll be  returning to Headquarters as soon as I have completed the necessary arrangements and spoken to the authorities. Can you contact Paul Foster and ask him to get back in as soon as possible? But don’t talk to anyone else.  I’ll tell the staff myself when I arrive.’ And he closed the connection before unvoiced loss and sadness overwhelmed him utterly. 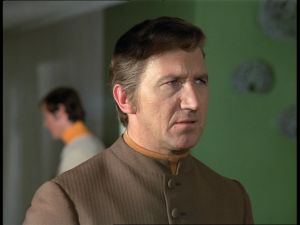 The pathologist pulled the thin sheet back, revealing Straker’s unmarked body resting on a  block. His chest, sparse blonde hair glinting under the lights, was stretched upwards as if still gasping for one  last desperate breath.  She peered down at his still, slender frame, now exposed to full view.  Flicking the  microphone on with an automatic gesture, she picked up her scalpel, pausing for a brief second in unspoken respect.  The  blade touched and  caressed  the ashen skin before slicing  its deep incision across from one shoulder to the sternum.

Alec Freeman, watching the proceedings from behind the glass panel in the observation room  wanted to turn away, did not want to watch the final indignity to his friend; that  long  slice through once soft, pliable, warm  flesh. But that would have been cowardly, would have been a denial of  their friendship, of the things they had shared in the past. So he watched. It was the only thing he could do now for Ed. His last gift.

There was very little blood. And it was that bleak fact more than anything, that made Alec Freeman accept that Straker was dead. And as the pathologist wiped away the insignificant  scarlet trail that followed the knife down that unflinching skin, Alec Freeman wiped away a salty bead of moisture that tracked down his own face.

He looked up at  the face of the pathologist, wondering what kind of person it took to  do something so disturbing, so  intrusive to another human. Even one who was past caring.

Her lips were moving.  Freeman watched for a few moments then looked around for the switch that would allow him to listen in to her commentary. But she was not relating a clinical account, instead she was talking to him, talking to Ed, in a gentle and soothing voice.

‘I  wonder what happened to you. You look… peaceful,  as if you are sleeping. Not many of my patients look so calm, so ..’ she brushed one gloved hand over close-cropped silver hair, ‘so relaxed. As if all your worries are finally over.’ There was a sigh of regret  as she reached for another implement, before starting to speak in a normal tone, brisk and efficient.

‘The upper torso and abdomen both  appear unmarked and undamaged.  I am about  to cut through the ribs on the lateral sides. After which I will remove the chest plate. There are no apparent signs of injury or long-standing medical conditions which might have contributed to death.’  She halted for a moment, looking down at the mortuary table, her hand gripping the saw,  and Alec Freeman turned away.

He had seen enough, had ensured that his friend was being treated with compassion and respect, and there was nothing else left  to do, apart from return to HQ and assume command. And wait for the pathologists report.

The drive back to the studios was longer than  he had remembered and he got tangled up in the rush hour traffic. Raging with anger, with helplessness, he sat there, desperate to get moving, to concentrate on driving and push away  the image that was burned onto his retina, the image of that  knife slicing through flesh. Forcing himself to take calm breaths he gripped the steering wheel  with tight fingers  and concentrated his thoughts on the events of the previous day, trying to think of anything untoward that might have occurred.

Nothing. It had  been another average, run-of-the-mill day. SHADO stuff, studio stuff, Straker stuff. Everything as normal. He  had finished on time for a change and for once so had Ed. There had been inconsequential chats as they both headed for their cars, Straker grumbling about the protection detail that had been foisted on him and that he was still trying to dismiss.

‘Look, Ed. It’s no use. Just go along with it. They aren’t that intrusive after all.’

Straker stopped and turned to his friend. ‘You don’t have to put up with it. Alec,’ he said with a bitter tone in his voice, ‘I am ushered everywhere, shepherded from one point to another with  no freedom and virtually no privacy. Oh I know,’ he sighed, weariness fading his voice to almost a whisper, ‘it’s necessary, but sometimes I  just want to be…anonymous.’ he stopped, grimaced and shook his head, misery evident in his hunched shoulders, his whole despondent stance.  Then with a last, almost indefinable look,  and a final shrug, headed to the  waiting car, with the waiting guards.

The raw resignation in those blue eyes, or perhaps  it was his ultimate acceptance of the loss of freedom, was the last painful memory that Colonel Freeman  recalled. And now Ed Straker was gone.

The traffic moved, slow and faltering, cars inching forward as if reluctant to reach their destinations.  Alec  changed gear, eased up on the clutch, braked, changed  gear again, all without  thinking, his body doing the driving by instinct, leaving his  mind free to reflect on how his own life had moved forward in the last couple of hours.   It would be necessary to assume command with as little disruption as possible.  But first he would have to  make the announcement. And Alec Freeman  wanted to stop his car, wanted to get out, walk away, run away. Anything rather than face the  next few hours.

The traffic moved forward, inch by inch until in  that peculiar way that happens without any explanation, it  surged forward, free of the constraints and his chance was  gone.  Colonel Freeman pushed the gear stick into third then fourth, fifth  and drove on, his eyes just ever-so-slightly betraying him by  blurring in the  bright sunshine.