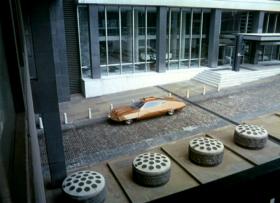 in January I  was transferred from SHADO HQ  to an area that is unfamiliar to me. I have been relying on my Sat-Nav to help me find my way around but there have been numerous difficulties, the latest of which involved me getting a Universal Markers transporter stuck under a low railway bridge.  Prior to that I was sent the wrong way down a one-way system and was sent to the wrong location because I mis-read a post code.

I have asked Commander Straker for a new Sat-nav system, as the current one is obviously out-of-date, but he simply laughed at me. He then  made a gesture with two fingers at me which I found quite perplexing and told me, rather rudely I thought,  to use map-nav…

I have no idea what he is referring to? Please can you help?

from your handwriting I can surmise that you are a member of the male sex. As we clinical psychologists have discovered, men usually  have a particularly  close affinity for  directions and anything that involves lateral thinking. It is a well-known fact  that  males are able to focus their minds sufficiently to  be able to think in a two-dimensional and even three-dimensional world. This is partly due to the higher levels of testosterone that can be found in men and can be ascertained by a comparison of the length of one’s fingers. The Commander was merely trying to demonstrate  that your level of spatial awareness can be measured using a simple test. His other suggestion, map-nav, was aimed at helping you  find an alternative to your inefficient Sat-nav which has been proved to be flawed.

Map-nav involves the use of an environmentally friendly device formed from wood-pulp, and can be safely stored in your vehicle. It also present less of a temptation to car thieves as it can be placed in the glove-box when not in use and does not  leave any residue on the windscreen. Map-nav also has the advantage that it is silent, without any annoyingly bland voice telling you which direction to take, and map-nav can be folded away when not needed.

It is also easily updated and certainly considerably cheaper that the current Sat-nav systems which are obsolete within a few months of purchase.

I have made an appointment tomorrow at 11.30 hours for you to have a fresh psychiatric test of  your intelligence quotient.

Depending on the results of your evaluation, coffee might be available afterwards.