The Gerry Anderson UFO SHADO Pistol Project began with the first UFO incident in September of 1970.  I was seven years old.  I saw the first episode of a new TV series called UFO.  I was hooked from the opening credits.  The opening credits features flashes of alien invasion, advanced rockets dogfighting in space, living on the moon, and episode featured Lt Gay Ellis changing her duty uniform into a sport skirt.  Everything a seven year old boy could want from a TV program.

Commander Straker and the soldiers of SHADO were fighting a secret war with an array of sleek weapon designs, from black and silver pistols, a blue rifle on the moon, and a sleek Silver, Black, and grey M16 Assault Rifle back at SHADO headquarters.  As the biggest FAN of UFO in the history of the world … you have to remember I was seven … the world consisted of about ten neighborhood blocks … I had to have all of the neat guns and spaceships to continue the battle Commander Straker never got to.   I began the quest to recreate the props and ships from the Gerry Anderson TV series.

I began my quest with modifying toy guns I already owned.  I had a Marx toy .45 Caliber Cap pistol that I added a wooded dowel shoved down the muzzle and sculpted modeling clay to form the iconic silver flash hider/silencer barrel extension.   Later I found out that modeling clay did not hold up well to the heat of the summer and replaced with all wood and layers of silver duct tape.  Forty years later, I decided I would learn to make a prototype of the prop pistol from scratch and try to recreate the magic of the Gerry Anderson UFO SHADO pistol.  I also decided that if I was going that far … I needed to learn how to cast the pistol in resin so I could share my UFO pistol with other fans of the UFO series.  Although there have been toy pistols, they were never built to the prop specifications.  In 1970, there were no DVD’s or video tape.

But forty years later, there were resources and information from fans that might help in the construction and provide guidance to certain details.  In 2011 there are whole organizations devoted to cataloging and reproducing high quality props from our favorite television shows and films.  One of the greatest organizations is the Replica Prop forum or RPF.  It is there I learned how to make the prototype, cast molds, and pour reproductions.

Finally, forty years later, I produced the first UFO SHADO pistol as a labor of love.  My wife stood by and watched as I gathered resources, did research, spent long hours in the shop, overcame obstacles, and trashed many failures, but finally succeeding.  I spent a great deal of time and money to produce just one mould and kit.  I offered the UFO pistol to other fans across the globe in forums and Ebay, only to find seven people interested in the project.  I made ten kits, and sold seven in the first round through private sales.  I took a lot of criticism and some harsh reviews among UFO fans.  I found that my labor of love was only to be shared with a few.

I also found some warm hearts and support from many other UFO fans.  Some loved the project, but could not afford to add the pistol to their collection.  Others offered support for just trying the project.  To all of those big hearted UFO fans I must say thank you for your support.   The fans of UFO who share their love of the Gerry Anderson series with friendship and fellowship are reasons I created this homage to a UFO SHADO icon of a Gerry Anderson style pistol prop.  I will continue to hone my skills and improve the models.  I am creating a second HERO version of the UFO pistol, the Two SHADO Rifles (Not the brown one) and possibly an ALIEN Rifle.  You can see the photos and the progress at the Replica Prop Forum.

Thank you to all the people who helped and supported this project.

The model in various stages of completion: 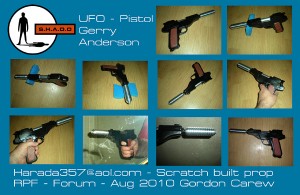 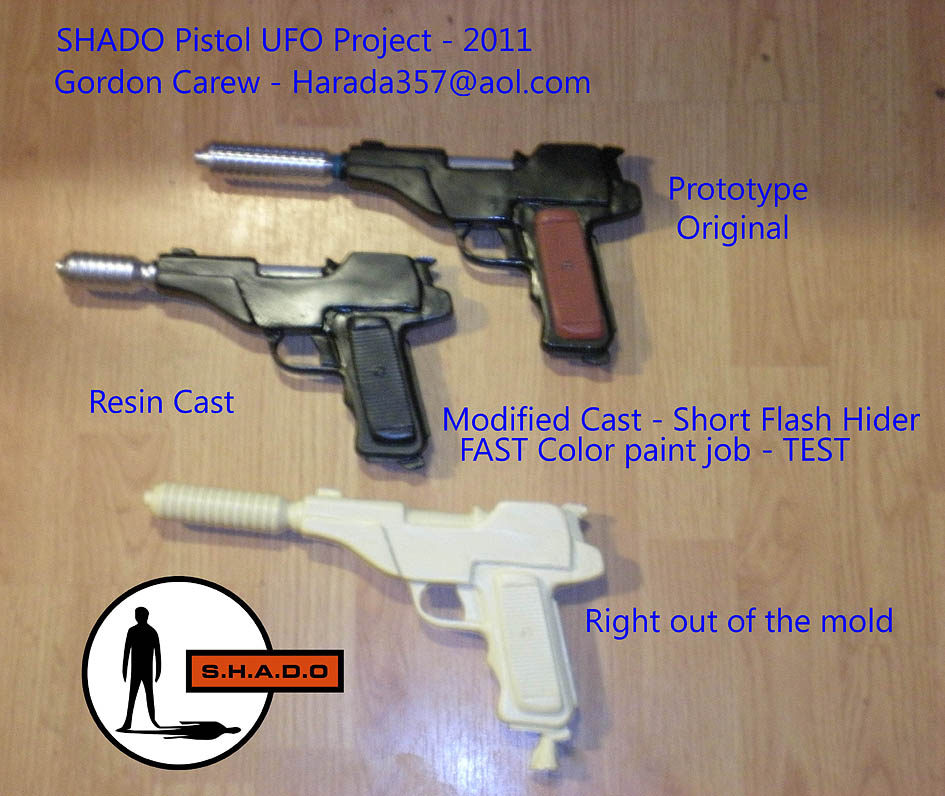 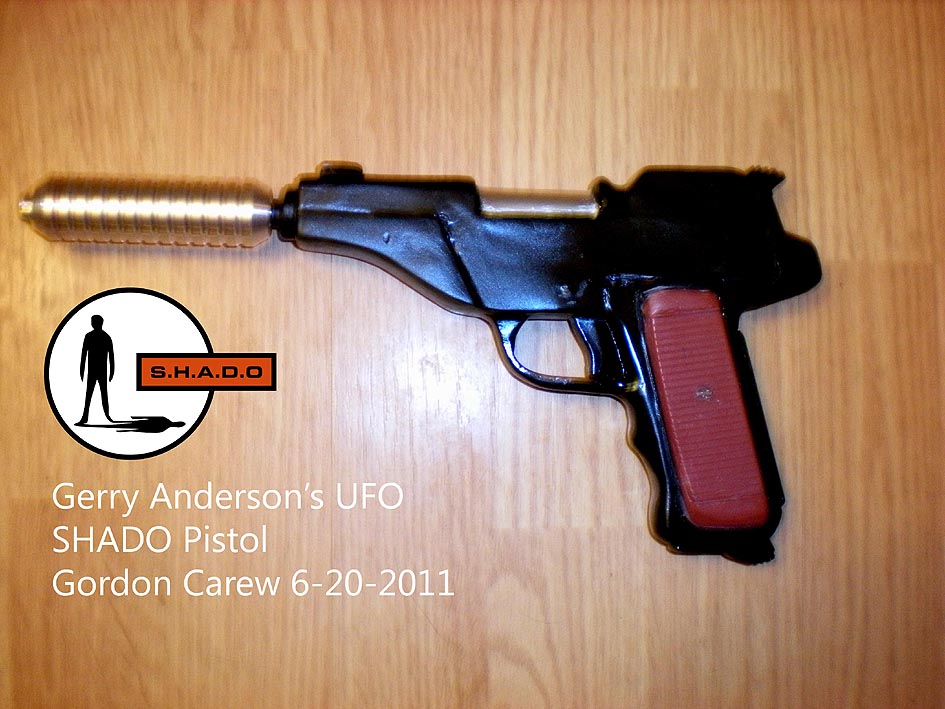 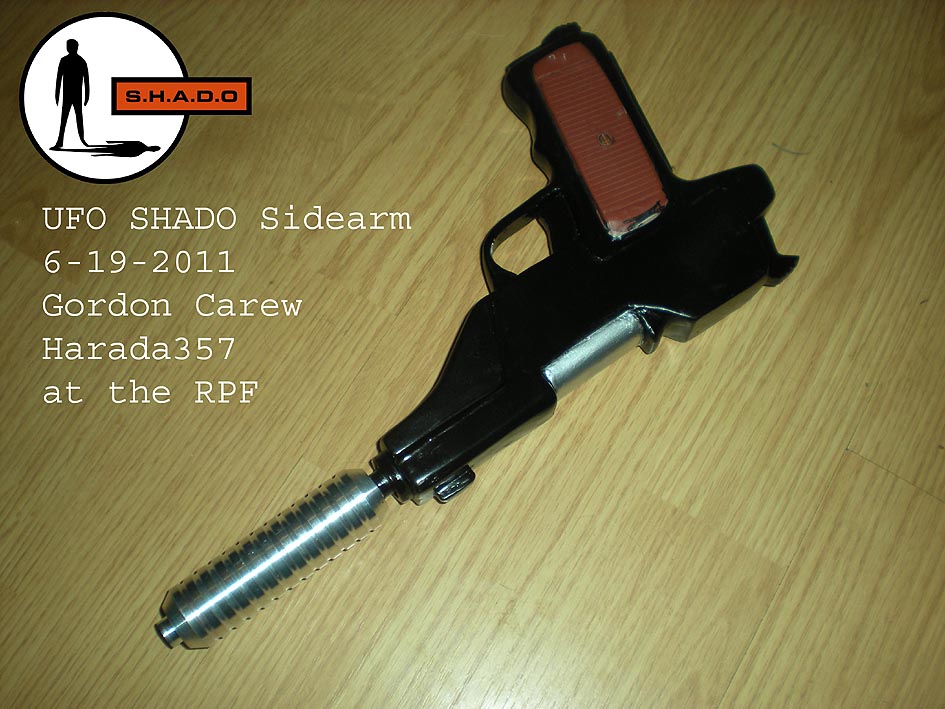 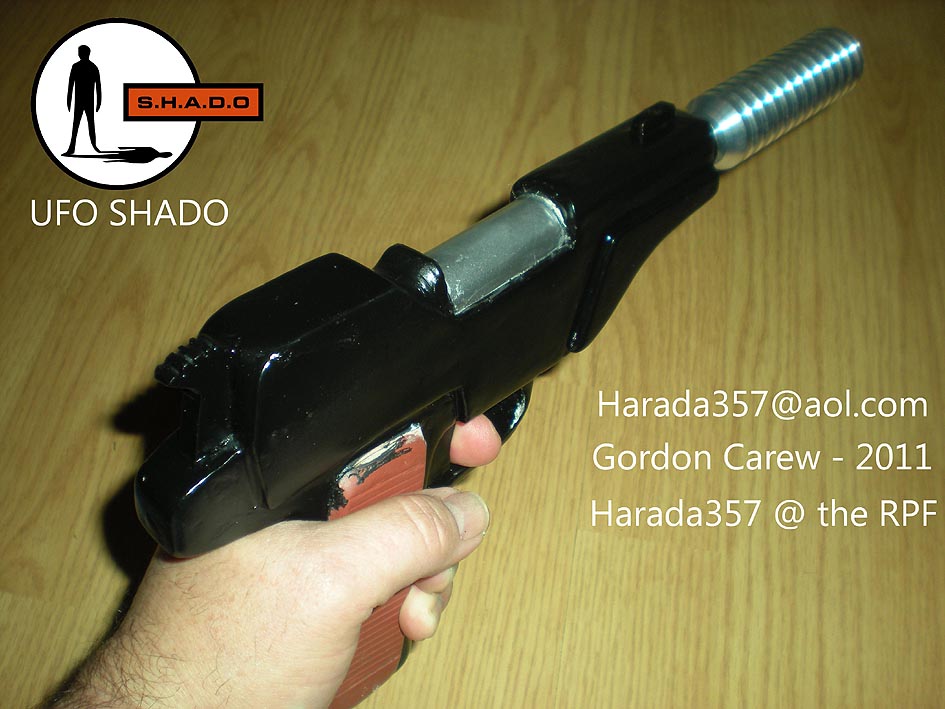 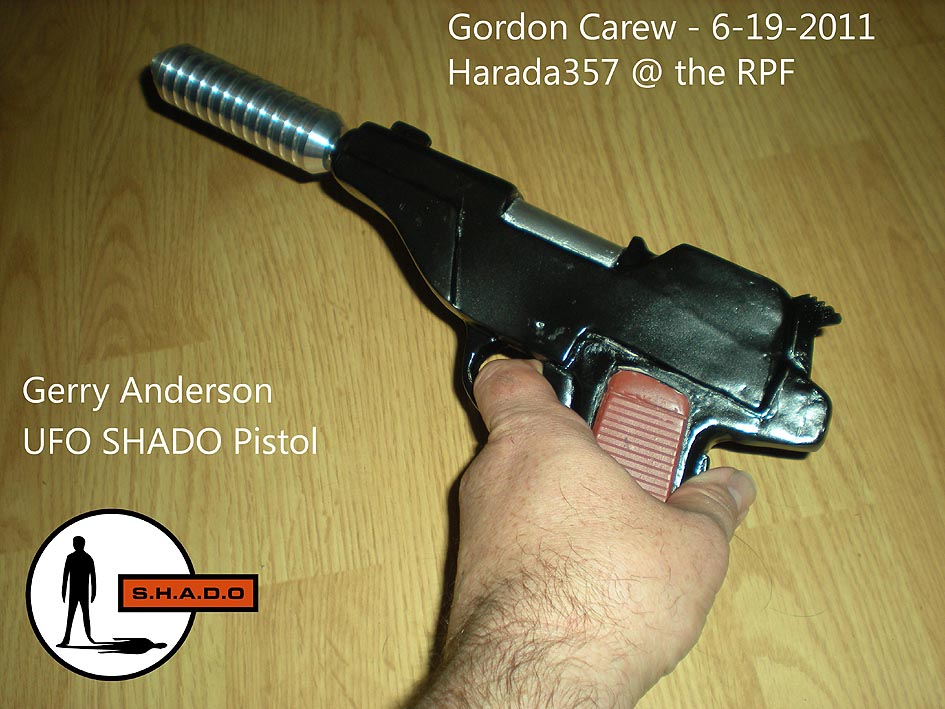