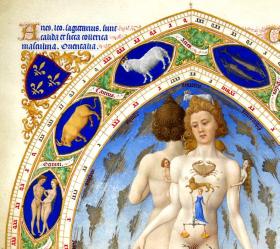 A surprise visitor will startle you later this month. Be prepared for a tall dark stranger at your door, but unfortunately, this will not lead to a long and emotional relationship. You will have a short, sharp shock, but after that there will be nothing further to concern you.

It promises to be a difficult month for you. Everything looks rosy until the 14th when a sudden rainstorm sends you running for shelter in nearby woods, only to bump into a rather sickly looking stranger who offers to let you wait in his vehicle.

Holidaying at the seaside? Be afraid, be very afraid. That boat excursion with the slightly sickly- looking and silent tour guide will end in tears. It’s not killer whales you are going to see; it’s something far more deadly.

Despite all the warnings, you insist on going out for a late-night run in an effort to lose that final half-stone. Who was it talked about a pound of flesh? And just how much does a human heart weigh? Mmm. Thought so.

Sol seeks to cause problems this month with some solar flares that play havoc with your electrical systems. Your laptop will suffer a CPU failure and your dvd recorder will fail to record the final of the big match. Never mind. Although your favourite team will lose, it does mean that we can sneak in under the radar and snatch a couple of take-aways. And we don’t mean Chinese or Indian either.

Jupiter might be in ascendance, but that isn’t going to protect anyone. Keep a watchful eye on the skies. A special goal might be in sight. Anyone living in the area around Harlington might be advised to stay indoors on the evening of the 23rd.

Think before you shell out any money on that Life Insurance policy that looks so tempting. It doesn’t come into operation until the first payment has been received next month, and by then you won’t be around to need it anyway. Go and spend the money on a decent last meal instead. As they say, ‘You can’t take it with you.’

A holiday is well overdue, so pack your bags and prepare for a trip to a far-flung corner of the universe. Don’t worry about getting a return ticket. You won’t need it.

Claustrophobic? Tough. You really won’t enjoy this month. Transport capsule are not renowned for their spaciousness. But once we get you home it will get worse. Believe me.

You have been feeling very dissatisfied for the last few weeks. Things seem to be passing you by while all your friends are forging ahead with successful careers and romantic liaisons. This month will see all those frustrations come to an end. An exotic visitor from a distant country will sweep you off your feet and steal your heart ( and liver and kidneys).

The fifth of the month? Don’t bother wondering about the rest. There won’t be one. You are lucky to have got this far actually.

Things are moving fast this month in your stars. Very fast. Extremely, incredibly fast. Faster than the speed of light. You don’t stand a chance Earthmen. Give up now, while you still have a chance. Next month it will be even worse.